Safe and Secure Control of Connected and Automated Vehicles 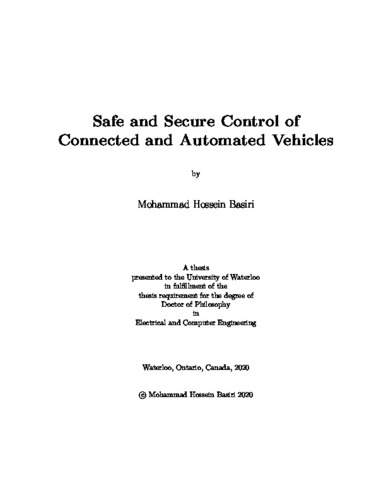 Evolution of Connected and Automated Vehicles (CAV), as an important class of Cyber-Physical Systems (CPS), plays a crucial role in providing innovative services in transport and traffic management. Vehicle platoons, as a set of CAV, forming a string of connected vehicles, have offered significant enhancements in traffic management, energy consumption, and safety in intelligent transportation systems. However, due to the existence of the cyber layer in these systems, subtle security related issues have been underlined and need to be taken into account with sufficient attention. In fact, despite the benefits brought by the platoons, they potentially suffer from insecure networks which provide the connectivity among the vehicles participating in the platoon which makes these systems prone to be under the risk of cyber attacks. One (or more) external intelligent intruder(s) might attack one (or more) of the vehicles participating in a platoon. In this respect, the need for a safe and secure driving experience is highly sensible and crucial. Hence, we will concentrate on improving the safety and security of CAVs in different scenarios by taking advantage of security related approaches and CAV control systems. In this thesis, we are going to focus on two main levels of platoon control, namely I) High level secure platoon control, and II) Low level secure platoon control. In particular, in the high level part, we consider platoons with arbitrary inter-vehicular communication topoloy whereby the vehicles are able to exchange their driving data with each other through DSRC-based environment. The whole platoon is modeled using graph-theoretic notions by denoting the vehicles as the nodes and the inter-vehicular communication quality as the edge weights. We study the security of the vehicle platoon exposed to cyber attacks using a novel game-theoretic approach. The platoon topologies under investigation are directed (called predecessor following) or undirected (bidirectional) weighted graphs. The attacker-detector game is defined as follows. The attacker targets some vehicles in the platoon to attack and the detector deploys monitoring sensors on the vehicles. The attacker's objective is to be as stealthy to the sensors as possible while the detector tries to place the monitoring sensors to detect the attack impact as much as he can. The existence of equilibrium strategies for this game is investigated based on which the detector can choose specific vehicles to put his sensors on and increase the security level of the system. Moreover, we study the effect of adding (or removing) communication links between vehicles on the game value. We then address the same problem while investigating the optimal actuator placement strategy needed by the defender to mitigate the effects of the attack. In this respect, the energy needed by the attacker to steer the consensus follower-leader dynamics of the system towards his desired direction is used as the game payoff. Simulation and experimental results conducted on a vehicle platoon setup using Robotic Operating System (ROS) demonstrate the effectiveness of our analyses. In the low level platoon control, we exploit novel secure model predictive controller algorithms to provide suitable countermeasure against a prevalent data availability attack, namely Denial-of-Service (DoS) attack. A DoS intruder can endanger the security of platoon by jamming the communication network among the vehicles which is responsible to transmit inter-vehicular data throughout the platoon. In other words, he may cause a failure in the network by jamming it or injecting a huge amount of delay, which in essence makes the outdated transferred data useless. This can potentially result in huge performance degradation or even hazardous collisions. We propose novel secure distributed nonlinear model predictive control algorithms for both static and dynamic nonlinear heterogeneous platoons which are capable of handling DoS attack performed on a platoon equipped by different communication topologies and at the same time they guarantee the desired formation control performance. Notably, in the dynamic case, our proposed method is capable of providing safe and secure control of the platoon in which arbitrary vehicles might perform cut-in and/or cut-out maneuvers. Convergence time analysis of the system are also investigated. Simulation results on a sample heterogeneous attacked platoon exploiting two-predecessor follower communication environment demonstrates the fruitfulness of the method.