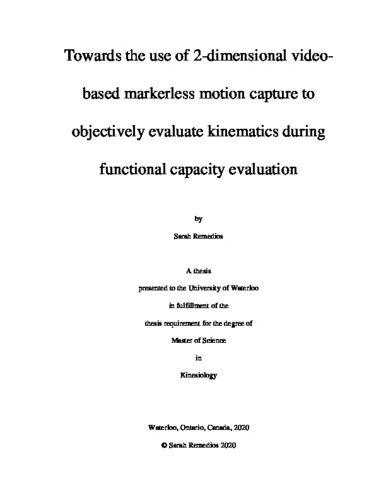 Backgrounds Workability, the capacity to perform work, is a concept highly regarded in a return-to-work context and typically measured using functional capacity evaluation (FCE). The aim of FCE is to determine the capacity of an individual such that they can be appropriately matched with job demands. Further, the usage of FCE is popularly used in attempt to proactively reduce the risk of injury in the workplace. Capacity is measured using tests, including maximum safe load tests and manual materials handling tolerance tests. However, the ability to predict workability using FCE has been questioned. Functional capacity evaluation administrators determine workability, in part, by using a priori parameters such as “the subject maintains balance," that are determined via subjective observations. Use of subjective observation may explain why the ability to reliably determine effort and capacity by using FCE remain in debate (Trippolini et al., 2014). However, a markerless motion-capture based solution may permit direct measurement of important movement features, and in turn, may improve the predictive utility and reliability of FCE outcomes. But, first, it remains important to evaluate if a 2-dimensional (2D) video-based markerless motion capture solution can generate objective outcomes that match with those generated using existing 3-dimensional (3D) motion capture. Objective. To determine the agreement of kinematic outputs calculated from motion data collected via a 2D video-based pose-estimation (markerless motion capture) software and a laboratory-based 3D motion capture for floor-to-waist height lifting task. The kinematic outputs calculated include peak knee flexion angle, peak trunk flexion angle, peak shoulder flexion and abduction angles, functional stability limits in the anterior-posterior and medial-lateral direction, the distance of the load relative to the center of gravity and mean absolute relative phase angles. Methods. Three floor-to-waist height lifts were used for analysis for each participant (N = 20). Participants’ lifts were captured using 3D motion capture (Vicon, Oxford, UK) and simultaneously recorded using 2D video (camcorder) in the sagittal plane. The participants lifts were each completed using a light, medium and heavy load dependent on the participants’ individual subjective capacities. Post-collection, motion data from 3D motion capture and video-based markerless motion capture were used separately to calculate the specific kinematic metrics of interest. The outcome measures calculated were peak knee flexion angle, peak trunk flexion angle, peak shoulder flexion and abduction angles, center of gravity relative to the load handled, base of support relative to the center of gravity in the anterior-posterior and medial-lateral directions, as well as mean absolute relative phase angles of the hip-knee for the flexion and extension phases of the lift separately. Bland-Altman analysis and plots were used to calculate agreement as a form of concurrent validity between the two methods. Results. For all outcome measures, Bland-Altman analysis did not suggest agreement between outcomes calculated using the 2D pose-estimation method and 3D motion capture method. Conclusions. Due to the lack of agreement between the two methods, it is advised that video-based markerless motion capture and 2D pose-estimation be further enhanced prior to use in calculating objective measures of FCE performance.