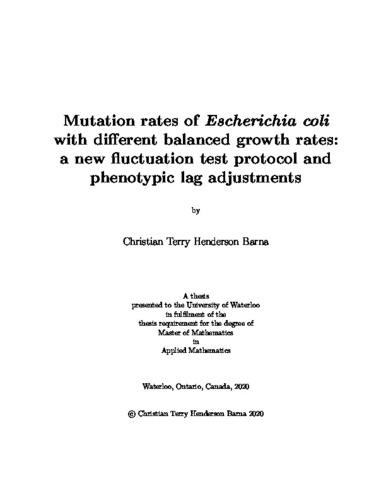 Bacteria are the oldest, most abundant life form on the planet, and every other organism’s livelihood is dependent on them. The bacteria Escherichia coli (E. coli) is commonly used in microbiology as a model organism to give insight into the functions of bacteria and cells in general. Of particular interest in these studies is the methods with which bacteria grow and evolve. Growth is what propagates a bacteria's species; whereas evolution is what allows them to adapt to the ever-changing world. Evolution is made possible by mutations which change a bacterium's DNA. In 1943, Luria and Delbrück developed a method, called a "fluctuation test", to estimate mutation rates from the number of mutants in a collection of parallel cultures exposed to a selecting agent after growth. The original fluctuation test methodology suffers from two major limitations. First, the bacteria are not in a reproducible, balanced state of growth throughout the test. Second, the new phenotype resulting from a mutation may not be immediately expressed (referred to as "phenotypic lag") resulting in an underestimated mutation rate. To overcome these issues, I developed a refined experimental protocol that ensures cells are in balanced growth and a suite of analysis tools that account for the effects of phenotypic lag. To test the methodology, I compared the mutation rate and phenotypic lag in fast growing E. coli (23 minutes per doubling) and slow growing E. coli (48 minutes per doubling). It is found that when not accounting for phenotypic lag, fast growing E. coli have a markedly lower mutation rate than slow growing E. coli, but when phenotypic lag is accounted for, the faster growing cells have a longer phenotypic lag, resulting in an indistinguishable mutation rate for fast and slow growing populations. The implications of mutation rate being coupled to growth rate, as well as possible explanations for why it and phenotypic lag would be growth rate dependent are discussed. Finally, possible ways to improve the experimental methodology and analysis protocols, in addition to future experiments that can be performed to further explore mutation rate - growth rate coupling are proposed.