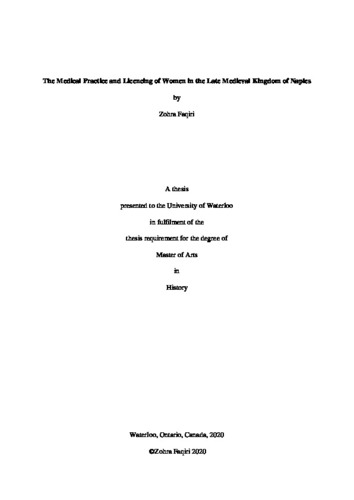 This paper analyzes the medical licences of women from the Angevin Kingdom of Naples between the late thirteenth to early fifteenth century. While the Kingdom of Naples was home to the first known medical regulatory measures and to an extensive amount of surviving medical licenses, little else is known about the medical profession and practices within Naples and even less of women’s practices. This paper makes up for the deficit by examining Neapolitan women’s medical practice and licences against the late medieval medical practice and regulatory measures of the wider western European world. The examination of the wider social context of late medieval medicine and medical regulation finds that the marginalization of women as legitimate and legal members of the medical profession was a byproduct of larger tensions that were introduced during the professionalization of healthcare. Primarily, cases of conflict occurred between academic practitioners who preferred to maintain the literate, text-based medical standards against empirics and other healers, who found support in local and royal authorities, as well as their communities. Often, the conflict boiled down to providing available and accessible medical care. Although this demand for practitioners ensured the continued survival of women’s medical practice, despite the growing rhetoric and legislation against it, women rarely reached the same degree of professional success as their male counterparts. As the comparison against the medical practices of Jews and clerics illuminates, the gendered differences in literacy played a strong role in hindering women’s acceptance within the medical profession, rather than any prejudices. The additional analysis of the social concept of gender against education, upbringing, economics, professional biases, cultural norms, and authoritative power, also reveals how pervasive gender was in influencing the types of medical licences and practices that state allowed Neapolitan women to have.

Zohra Faqiri (2020). The Medical Practice and Licencing of Women in the Late Medieval Kingdom of Naples. UWSpace. http://hdl.handle.net/10012/16452