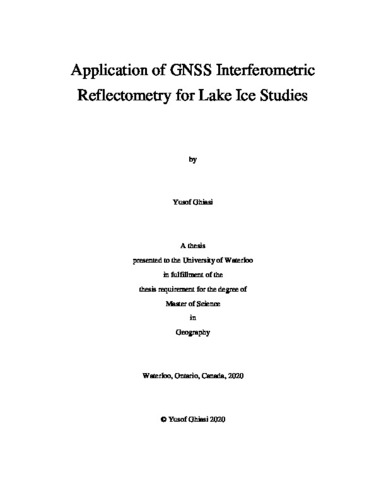 This thesis examines the use of Global Navigation Satellite System Interferometric Reflectometry (GNSS-IR) for the study of lake ice with a particular focus on the estimation of ice thickness. Experiments were conducted in two lake regions: (1) sub-Arctic lakes located near Yellowknife and Inuvik in the Northwest Territories during March 2017 and 2019, and (2) MacDonald Lake, Haliburton, Ontario, which is known as a mid-latitude lake, during the ice season of 2019-2020. For both regions, GNSS-IR results are compared and validated against in-situ ice and on-ice snow measurements, and also with ice thickness derived from thermodynamic lake ice models. In the first experiment, GNSS antennas were installed directly on the ice surface and the ice thickness at each site was estimated by analyzing the signal-to-noise ratio (SNR) of the reflected GNSS signals. The GNSS-IR capability of ice thickness estimation tested on sub-Arctic lakes results in a root mean square error (RMSE) of 0.07 m, a mean bias error (MBE) of -0.01 m, and a correlation of 0.66. At MacDonald Lake, a GNSS antenna was mounted on a 5-m tower on the shore to collect reflected signals from the lake surface. The Least-Squares Harmonic Estimation (LS-HE) method was applied to retrieve higher SNR frequencies in order to estimate the depths of multiple layers within lake ice and the overlaying snowpack. Promising results were obtained from this experiment; however, ice thickness estimation using GNSS-IR at this mid-latitude lake site was found to be highly dependent on the presence or absence of wet layers such as slush at the snow-ice interface and wet snow above that interface. On colder days, when there was a lower chance for the formation of wet layers, ice thickness could be estimated with a correlation of 0.68, RMSE of 0.07 m, and MBE of -0.02 m. In addition, GNSS-IR showed the potential for determining the freeze-up and break-up timing based on the SNR amplitude of reflected signals. The novel work presented in this thesis points to the potential of using reflected signals acquired by recent (e.g. Cyclone Global Navigation Satellite System (CYGNSS) and TechDemoSat-1 (TDS-1)) and future GNSS-R missions for lake ice investigations.