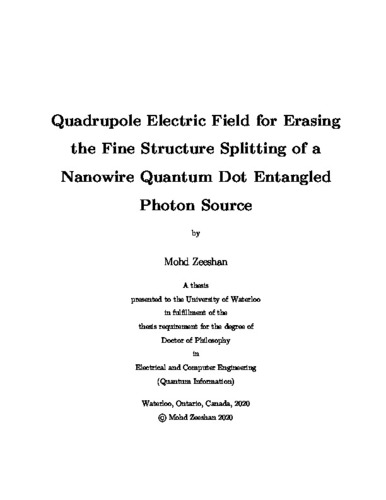 Entanglement is an essential tool in quantum information processing (QIP), for example, to achieve a secure quantum communication network and quantum computing. Semiconductor quantum dots can generate on-demand entangled photon pairs via the biexciton-exciton cascade. These solid-state sources are currently limited in their applications due to two major challenges: first is the collection efficiency since only a fraction of a percent of the emitted photons from the quantum dot can be collected due to its isotropic emission profile; and second is the FSS that causes an energy splitting of the intermediate exciton state —it arises due to strain and structural asymmetry of the quantum dot and degrades its measured entanglement fidelity. Quantum dots have been integrated into photonic structures such as microcavities and nanowires to enhance their collection efficiency by coupling the emitted photons to the cavity or fundamental nanowire waveguide mode. However, the fine structure splitting still remains a major challenge, and although many post growth perturbation techniques have been implemented to tune and completely erase the FSS of a self-assembled Quantum Dot (QD), erasing the FSS of a QD in a photonic structure has not yet been achieved. In this thesis, we propose and then demonstrate for the first time the tuning of the FSS for a indium arsenic phosphide (InAsP) QD in a tapered indium phosphide (InP) nanowire by applying a quadrupole electric field. Out of all the post-growth perturbation based FSS erasing techniques, electric fields, and stress fields have been the most successful ones in erasing the FSS of a self-assembled quantum dot. However, implementing them on a nanowire quantum dot source is not a straightforward solution to its FSS problem. Stress field techniques are difficult to implement on a nanowire quantum dot source due to the thick nanowire shell around the quantum dot, where most of the applied external stress field relaxes and therefore doesn't reach the embedded quantum dot. The electric field on the other hand is known for reducing the electron-hole (e-h) overlap and therefore if implemented in its conventional form will reduce the QD brightness while erasing its FSS. Moreover, both stress and electric field techniques require multiple perturbation axes to erase the FSS of a quantum dot with any possible dipole orientation or macroscopic asymmetry. We overcame these problems by developing a novel approach of applying a quadrupole electric field along the plane of an embedded quantum dot inside the nanowire. We show theoretically that a quadrupole electric field corrects for the spatial asymmetry of the excitonic wave function for any quantum dot dipole orientation (θ = 0°, 10°, 20°) inside a nanowire and completely erases its fine structure splitting from 11 μeV to 0.05 μeV while maintaining a strong e-h overlap (β = 99%, 90, for a dot with θ = 0°, 20°) even after applying a correction quadrupole electric field. To experimentally demonstrate our theory we fabricated two prototypes of electrically gated InAsP/InP QD nanowire devices, with four metal gates precisely positioned around an individual InAsP quantum dot inside a vertically standing InP nanowire. The electrooptical characterization of an electrically gated nanowire quantum dot device shows the FSS tuning from 7 μeV to 4 μeV by application of a quadrupole electric field. Although we have achieved a FSS tuning in nanowire device, tuning and completely erasing the FSS of a nanowire device will require a significant improvement in the fabricated device design. This will require reducing the dimension of the metal gates and aligning it perfectly to touch the sidewalls of the vertical nanowires. We also observed the degradation in the QD emission while exposing it to 100 kV electron-beam (e-beam). Therefore, we propose a bottom-up approach of fabricating the device by first patterning the metal gates by e-beam lithography on a wafer and then selectively growing the nanowire QD source at its center by the conventional site-selected vapor-liquid-Solid (VLS) growth method. In principle, such an electrically gated device will erase the FSS of a nanowire quantum dot source and will bring it closer to becoming a deterministic source of entangled photons with near-unity fidelity and collection efficiency.