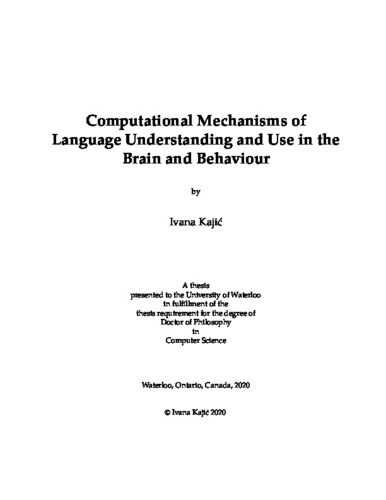 Linguistic communication is a unique characteristic of intelligent behaviour that distinguishes humans from non-human animals. Natural language is a structured, complex communication system supported by a variety of cognitive functions, realized by hundreds of millions of neurons in the brain. Artificial neural networks typically used in natural language processing (NLP) are often designed to focus on benchmark performance, where one of the main goals is reaching the state-of-the-art performance on a set of language tasks. Although the advances in NLP have been tremendous in the past decade, such networks provide only limited insights into biological mechanisms underlying linguistic processing in the brain. In this thesis, we propose an integrative approach to the study of computational mechanisms underlying fundamental language processes, spanning biologically plausible neural networks, and learning of basic communicative abilities through environmentally grounded behaviour. In doing so, we argue for the usage-based approach to language, where language is supported by a variety of cognitive functions and learning mechanisms. Thus, we focus on the three following questions: How are basic linguistic units, such as words, represented in the brain? Which neural mechanisms operate on those representations in cognitive tasks? How can aspects of such representations, such as associative similarity and structure, be learned in a usage-based framework? To answer the first two questions, we build novel, biologically realistic models of neural function that perform different semantic processing tasks: the Remote Associates Test (RAT) and the semantic fluency task. Both tasks have been used in experimental and clinical environments to study organizational principles and retrieval mechanisms from semantic memory. The models we propose realize the mental lexicon and cognitive retrieval processes operating on that lexicon using associative mechanisms in a biologically plausible manner. We argue that such models are the first and only biologically plausible models that propose specific mechanisms as well as reproduce a wide range of human behavioural data on those tasks, further corroborating their plausibility. To address the last question, we use an interactive, collaborative agent-based reinforcement learning setup in a navigation task where agents learn to communicate to solve the task. We argue that agents in such a setup learn to jointly coordinate their actions, and develop a communication protocol that is often optimal for the performance on the task, while exhibiting some core properties of language, such as representational similarity structure and compositionality, essential for associative mechanisms underlying cognitive representations.

Ivana Kajic (2020). Computational Mechanisms of Language Understanding and Use in the Brain and Behaviour. UWSpace. http://hdl.handle.net/10012/16439