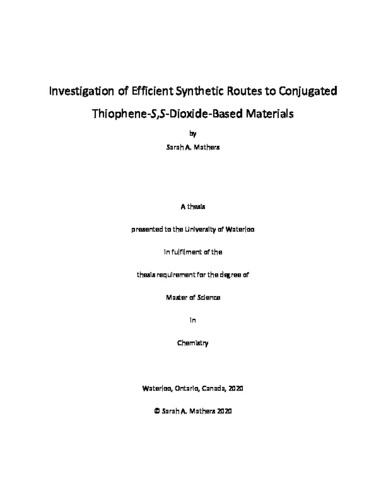 Due to their low cost and desirable properties, many recent efforts in the field of semiconductor research have been devoted to the discovery and investigation of organic materials. Within this field, thiophene-based materials make up a large portion of the abundant p-type semiconductors seen in research and commercial devices. All the while, the options for n-type materials are limited due to the restrictive constraints placed on their electronic properties in order to be air stable. Thiophene-S,S-dioxide-based materials have the potential to be strong contenders with n-type materials currently available. However, they are currently difficult to obtain synthetically, in large part due to the loss of aromaticity that occurs upon oxidation of the thiophene moiety. Typically, long reaction times, and/or harsh reaction conditions, or highly toxic, unstable reagents are required. Herein, two potential synthetic routes to thiophene-S,S-dioxides are described. The first aimed to take advantage of hydrogen bonding interactions to direct the oxidation of the thiophene, and then use the same directing group as a handle for ipso-arylative cross-coupling. This approach would ultimately reduce the need for harsh conditions, and minimize the number of steps required to produce thiophene-S,S-dioxide-based materials. The second route looked to be the first synthesis of a thiophene-S,S-dioxide that does not involve the oxidation of a thiophene or thiophene-S-oxide, by performing a formal [2+2+1] between two alkynes and sulfur dioxide, provided by an SO2 surrogate. While the first method was able to produce the desired thiophene-S,S-dioxide, the oxidation does not seem to be promoted by the intended directing group, and the thiophene-S,S-dioxides involved have been observed to be unstable to the ipso-arylation conditions. Reaction conditions investigated for the second route do not appear to yield the desired thiophene-S,S-dioxides, but have produced other materials for which structural elucidation and characterization is ongoing.