Coherent delocalization in the light-matter interaction 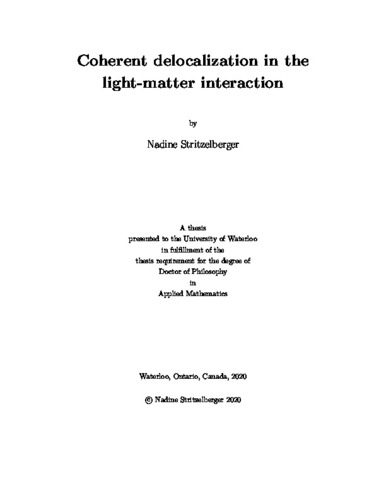 In this thesis, we study coherent delocalization in the light-matter interaction: we investigate how the coherent center of mass delocalization of a first quantized system affects its interaction with a second quantized field. We develop a suitably generalized Unruh-DeWitt model for the interaction between a delocalizing particle and a relativistic quantum field. We discuss the impact which the coherent spreading of the detector's center of mass wave function has on the simple processes of absorption, spontaneous emission and vacuum excitation. We find that the dynamical virtual delocalization process leads to interesting new phenomenology not only for the interaction of matter systems with the electromagnetic quantum field, but also with other fields such as a phonon field. For instance, we predict that in a medium, in the case of a supersonic coherent spreading of the center of mass wave function, a coherently delocalized detector may get excited and emit Cherenkov-like radiation. We further investigate how the coherent center of mass delocalization impacts the process of entanglement harvesting and the Unruh effect.