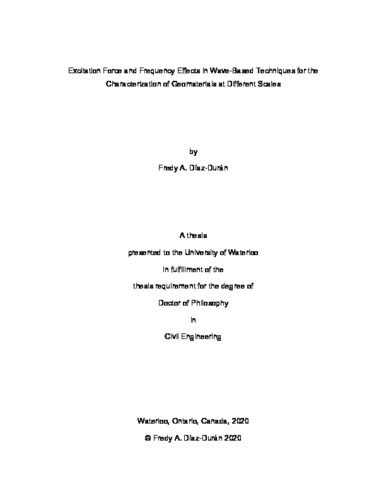 All around the world, building codes require the characterization of geomaterials as a fundamental step in the foundation design process. Specifically, in seismic design, the evaluation of dynamic properties is a key requirement for the dynamic site characterization. Soil dynamic properties can be obtained in-situ and in the laboratory. However, there are limitations to either approach. The effect of the acoustic impedance ratio for the top materials in a layered media can have a major influence on in-situ measurements. On the other hand, the effect of the frequency content of the excitation source on the dynamic properties obtained from either field or laboratory measurements is not well understood. In addition, the scale or dimensions of the volume of material being tested represents also a challenge in the interpretation of field and laboratory measurements. Hence, the combination of impedance ratio, frequency content, and scale effects may lead to significant errors in the seismic design of civil infrastructure. The acoustic impedance ratio between top materials in a layered media is currently not considered when performing seismic testing in the field. However, this ratio plays a key role in the evaluation of the potential success of seismic tests such as MASW and sCPTU for the quantification of dynamic properties in different soil profiles. The lack of understanding of impedance ratio effects can lead practitioners to the incorrect interpretation of field test results. Likewise, the lack of characterization of the seismic source used in the field (i.e. applied force amplitude, pulse duration, and frequency content) prevents practitioners and researchers from improving the reliability of seismic tests. Furthermore, the incorrect characterization of the seismic source prevents the accurate representation of field conditions in numerical models; which are needed to advance the interpretation and understanding of complex field conditions. On the other hand, seismic source characterization is also needed to enhance laboratory testing techniques. For instance, the unknown characteristics of the excitation in typical bender elements test are preventing practitioners and researchers from the correct interpretation of lab results and the understanding of the bender element – soil specimen interaction. Overcoming this challenge is needed to make reliable standards for bender element testing, which has become a frequent practice because of their simple and economical implementation in different geotechnical instruments (e.g. triaxial, odometer, and direct simple shear devices). The main objective of this thesis is to address these three issues to improve the dynamic characterization of geomaterials at low strain levels at different scales using mechanical waves. Hence, field, laboratory, and numerical tests are used to study the effects of acoustic impedance ratio in layered media, the frequency content of the source in seismic (i.e. sCPTU and MASW tests), and the bender element testing. The problem of soil dynamic characterization is addressed by considering different spatial distributions of materials (i.e. homogeneous media, layered media, and spatially variable media), different frequency contents in the input source of seismic tests, and different scales (i.e. field scale, physical laboratory models, and soil sample-scale in bender element testing). Thus, the main contributions of this research are given in these three main areas. First, the excitation frequency and impedance ratios between the top layers are studied using calibrated numerical models. The results show that there is an important limitation for the applicability of the MASW test in soft soils. Soil profiles with impedance ratios between 0.4 and 0.5 showed a reduction of up to 20% in the estimated value of the average shear wave velocity for the shallower 30 meters (). Second, a new methodology for the characterization of the excitation source in near-surface seismic testing using laboratory, field, and numerical simulation results is presented. The results show that when the frequency content of the excitation source is limited in the generation of high-frequencies (e.g. wavelengths three times smaller than the layered thickness) the dynamic properties obtained in sCPTU could overestimate or underestimate shear wave velocities up to 9%. A novel technique using the transfer function approach is used to characterize the source in a seismic test. Once the input source is known, the study of the effect of changes in the frequency content of the source is possible for multiple soil profiles. Finally, the characterization of the transmitter bender element using a modern laser vibrometer and a resonant column device is presented. The results demonstrate there is significant participation of P-waves in the response of typical bender element tests. The transmitter bender element not only vibrates in the horizontal direction, as commonly assumed but also in the vertical direction. More importantly, the participation of vertical vibration modes increases with the excitation frequency and the confinement level. This discovery improves not only the interpretation of bender element tests but also allows the use of typical bender elements to simultaneously measure P-waves and S-waves by using different excitation frequencies.