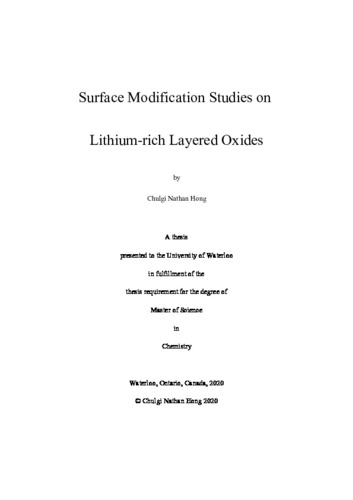 The importance of developing energy-dense lithium-ion batteries has gained much attention due to the rapid advancement in portable electronic devices to electric vehicles. In order to fulfill the energy requirement of those applications, much of the attention has gone to developing high energy density lithium-rich cathode active materials. Among various lithium-rich cathodes, lithium-rich nickel cobalt manganese layered oxide (HE-NCM) is considered to be used in lithium-ion batteries due to the high energy density from HE-NCM. Although this cathode has been developed over a decade ago, the use of HE-NCM as the next-generation battery chemistry has been a challenging task due to problems such as electrolyte oxidation and cathode structural instability at high voltage. Many researchers tried to solve these issues by surface modifications with metal oxides and fluorides since electrolyte oxidation and structural degradation begins from the cathode surface. Although surface modification strategies show promising results on mitigating side reactions between the cathode and electrolyte interface, much of the studies regarding the effects of surface modification as a mean to address lattice oxygen release have not much been investigated. Battery researchers believe that the origin of the electrolyte oxidation is related to the interface between the cathode and liquid electrolyte, namely electron transfer from ethylene carbonate to the cathode surface at high voltage. Thus, studies regarding surface coatings including Al2O3, AlF3, LiAlO2, MgF2, and others were implemented with highly insulating materials to prevent electrolyte oxidation. Although these coatings indeed show positive effects on cycling stability, cathode structural degradation still occurs. Extensive studies were continued by many researchers to find other governing factors to improve structural stability and mitigate capacity degradation. A recent study revealed that surface degradation of HE-NCM is closely related to the lattice oxygen loss, and this loss is triggered by substantial depletion of lithium ions when charged up to 4.7 V, which then yields to underbonded oxygen in the lattice. Herein, a Li-Mo-O coating is used to modify the HE-NCM surface to address the problem of lattice oxygen loss and electrode – electrolyte interfacial side reactions. To better distribute Mo coating, exfoliated molybdenum oxide hydroxide hydrate was used to coat on HE-NCM. The coated HE-NCM was then heat treated in air at 600 oC to induce Mo6+ surface diffusion and Li-Mo-O coating. The structural and chemical analysis of the coated HE-NCM was investigated using various spectroscopic tools such as XRD, XPS, Raman, SEM, EDS and TEM. After series of analysis, Li-Mo-O coated HE-NCM was washed with de-ionized water to remove the coating. Decoupling of the Li-Mo-O coating and Mo6+ surface diffusion effects were systematically initiated by comparing electrochemical performance tests on the pristine, water washed 3 wt% Li-Mo-O coated and 3 wt% Li-Mo-O coated HE-NCM. The coated HE-NCM shows enhanced stability for over 200 cycles when compared with non-surface modified HE-NCM. The surface modification procedure is facile and scalable, which can be potentially beneficial towards commercialization of lithium-rich layered oxides.