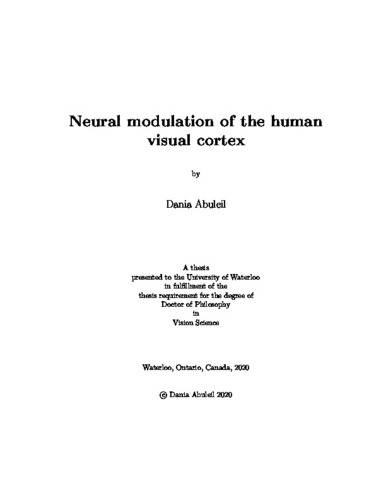 Neuroplasticity is a phenomenon that refers to the brain’s ability to reorganize, strengthen, and form neural connections, a process that becomes increasingly more difficult with age. Gamma amino-butyric acid (GABA), the primary inhibitory neurotransmitter in the brain, is thought to gate neuroplasticity, with increasing concentrations related to the closure of the critical period of development. As a result, the modulation of neuroplasticity and GABA concentration may have implications in the recovery and rehabilitation of neural functions. This research addresses neuroplasticity in the visual cortex by applying rapid visual stimulation and non-invasive brain stimulation using both physiological and psychophysical outcome measures. One fundamental mechanism of neuroplasticity is known as long-term potentiation (LTP), a synaptic strengthening mechanism characterized by changes in cortical physiology and underlies the processes of learning and memory formation. While LTP can be induced in animal models of the brain through invasive electrical stimulation, recent studies have demonstrated LTP-like effects induced by rapid visual stimulation. Another technique that modulates neuroplasticity is non-invasive brain stimulation. Anodal transcranial direct current stimulation (a-tDCS) has been reported to decrease GABA concentration in the motor cortex, while a form of magnetic stimulation, continuous theta-burst stimulation (cTBS) has the opposite effect. Cortical GABA concentration is measured directly using magnetic resonance spectroscopy (MRS) an imaging technique that quantifies neural metabolites within a small region of interest. Binocular rivalry—a phenomenon wherein perception alternates stochastically when two different images are shown to each eye—has been directly and indirectly associated with visual cortex GABA concentration, which poses the question of whether binocular rivalry dynamics can be used as an indirect measure of GABA concentration. First, we tested the hypothesis that rapid monocular visual stimulation would increase the dominance of the stimulated eye during a binocular rivalry task. Unexpectedly, we found that rapid monocular visual stimulation strengthens the non-stimulated eye, a result which was not explained by adaptation, suggesting that the shift in dominance towards the non-stimulated eye may result from a homeostatic gain control mechanism. Secondly, we investigated the effects of two opposing forms of non-invasive brain stimulation, a-tDCS and cTBS, on binocular rivalry dynamics. We hypothesized that a reduction of GABA using a-tDCS would result in an increase in binocular rivalry alternation rates, while cTBS would have the opposite effect. Although binocular rivalry alternation rates did not change with either stimulation method, duration of mixed perception increased significantly following cTBS. An increase in the inhibitory neurotransmitter GABA may translate to a reduction in neural noise, a complement to the phenomenon of stochastic resonance where increased neural noise may increase the detection of weak signals. Finally, we investigated the effects of a-tDCS on visual cortex GABA and glutamate concentration. Although many studies report a reduction in motor cortex GABA concentration following a-tDCS, our results showed that visual cortex GABA concentration remained the same. Unexpectedly, we found a trend for an increase in glutamate following active a-tDCS, supporting the possibility that a-tDCS effects the visual cortex and motor cortex differently. It is evident that there are many complex mechanisms that gate plasticity, and that modulating neuroplasticity is not as simple as we may have thought. Understanding these mechanisms, however, and the effects of modulatory techniques such as rapid visual stimulation and non-invasive brain stimulation on visual cortex plasticity, will provide a foundation for improving the recovery and rehabilitation potential of neurodevelopmental disorders and brain damage.