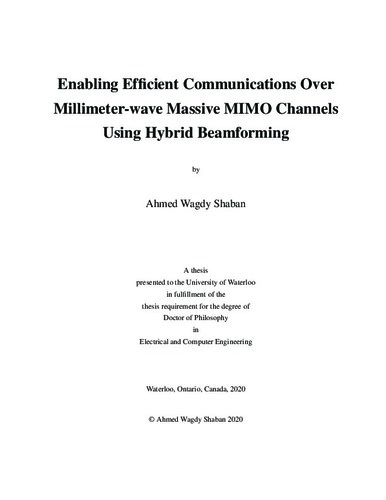 The use of massive multiple-input multiple-output (MIMO) over millimeter wave (mmWave) channels is the new frontier for fulfilling the exigent requirements of next-generation wireless systems and solving the wireless network impending crunch. Massive MIMO systems and mmWave channels offer larger numbers of antennas, higher carrier frequencies, and wider signaling bandwidths. Unleashing the full potentials of these tremendous degrees of freedom (dimensions) hinges on the practical deployment of those technologies. Hybrid analog and digital beamforming is considered as a stepping-stone to the practical deployment of mmWave massive MIMO systems since it significantly reduces their operating and implementation costs, energy consumption, and system design complexity. The prevalence of adopting mmWave and massive MIMO technologies in next-generation wireless systems necessitates developing agile and cost-efficient hybrid beamforming solutions that match the various use-cases of these systems. In this thesis, we propose hybrid precoding and combining solutions that are tailored to the needs of these specific cases and account for the main limitations of hybrid processing. The proposed solutions leverage the sparsity and spatial correlation of mmWave massive MIMO channels to reduce the feedback overhead and computational complexity of hybrid processing. Real-time use-cases of next-generation wireless communication, including connected cars, virtual-reality/augmented-reality, and high definition video transmission, require high-capacity and low-latency wireless transmission. On the physical layer level, this entails adopting near capacity-achieving transmission schemes with very low computational delay. Motivated by this, we propose low-complexity hybrid precoding and combining schemes for massive MIMO systems with partially and fully-connected antenna array structures. Leveraging the disparity in the dimensionality of the analog and the digital processing matrices, we develop a two-stage channel diagonalization design approach in order to reduce the computational complexity of the hybrid precoding and combining while maintaining high spectral efficiency. Particularly, the analog processing stage is designed to maximize the antenna array gain in order to avoid performing computationally intensive operations such as matrix inversion and singular value decomposition in high dimensions. On the other hand, the low-dimensional digital processing stage is designed to maximize the spectral efficiency of the systems. Computational complexity analysis shows that the proposed schemes offer significant savings compared to prior works where asymptotic computational complexity reductions ranging between $80\%$ and $98\%$. Simulation results validate that the spectral efficiency of the proposed schemes is near-optimal where in certain scenarios the signal-to-noise-ratio (SNR) gap to the optimal fully-digital spectral efficiency is less than $1$ dB. On the other hand, integrating mmWave and massive MIMO into the cellular use-cases requires adopting hybrid beamforming schemes that utilize limited channel state information at the transmitter (CSIT) in order to adapt the transmitted signals to the current channel. This is so mainly because obtaining perfect CSIT in frequency division duplexing (FDD) architecture, which dominates the cellular systems, poses serious concerns due to its large training and excessive feedback overhead. Motivated by this, we develop low-overhead hybrid precoding algorithms for selecting the baseband digital and radio frequency (RF) analog precoders from statistically skewed DFT-based codebooks. The proposed algorithms aim at maximizing the spectral efficiency based on minimizing the chordal distance between the optimal unconstrained precoder and the hybrid beamformer and maximizing the signal to interference noise ratio for the single-user and multi-user cases, respectively. Mathematical analysis shows that the proposed algorithms are asymptotically optimal as the number of transmit antennas goes to infinity and the mmWave channel has a limited number of paths. Moreover, it shows that the performance gap between the lower and upper bounds depends heavily on how many DFT columns are aligned to the largest eigenvectors of the transmit antenna array response of the mmWave channel or equivalently the transmit channel covariance matrix when only the statistical channel knowledge is available at the transmitter. Further, we verify the performance of the proposed algorithms numerically where the obtained results illustrate that the spectral efficiency of the proposed algorithms can approach that of the optimal precoder in certain scenarios. Furthermore, these results illustrate that the proposed hybrid precoding schemes have superior spectral efficiency performance while requiring lower (or at most comparable) channel feedback overhead in comparison with the prior art.