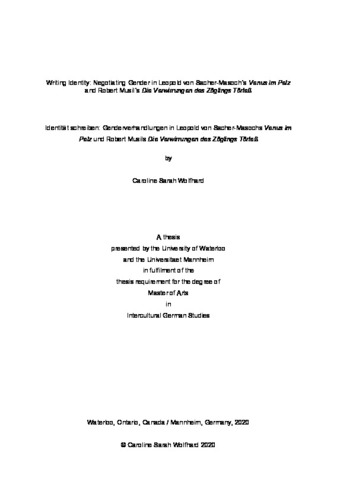 The age of the Industrial Revolution has led to a variety of changes in human society. One of these changes was a shift in gender-roles for men and women. The social role and the behavior of people became a consequence of their biological sex. Hence, men and women were seen as entirely different regarding their character, abilities and duties. Furthermore, stereotypical parameters of what makes one a ‘real’ man or ‘real’ woman were discursively constructed and spread. The goal of this thesis is to develop a new approach to gender relations in Leopold von Sacher-Masoch´s Venus im Pelz and Robert Musil´s Die Verwirrungen des Zöglings Törleß. A lot of the already existing research of these two 19th century novels include definitions of masochism and sadism. The concept of masochism and sadism works by distinguishing between what is considered normal and what is not – especially when it comes to sexuality and gender. I argue that these novels show that gender is a socially constructed category and not based on the biological sex of a person. The gender-roles in the novels do not go along with the expectations of the 19th century society, hence, they show that the character´s identity is not linked to their sex. Therefore, the interplay of power and subjugation in the novels is closely analyzed. I argue that the characters do not portray stereotypical versions of masculinity and femininity and/or their failure, which makes them behave in a certain way. Rather, they challenge gender-stereotypes.