"I must become something else": Identitätskonstruktion und die Superheldenrolle in der Fernsehserie Arrow 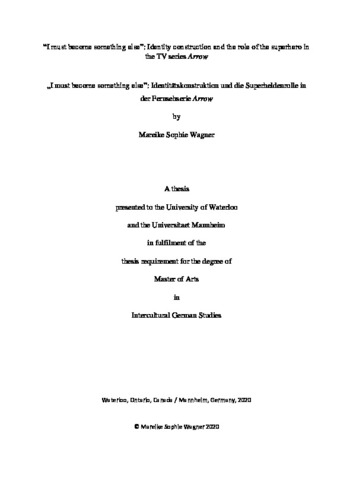 This thesis deals with how the protagonist of the CW superhero TV series Arrow constructs his identity. Arrow tells the story of Oliver Queen, who returns home after being shipwrecked and assumed dead, to start working as the vigilante superhero Arrow. As a character leading a life split in two – a private and a superhero life – Oliver Queen has difficulties answering the question of who he really is, especially after his time as a castaway and his connection to vari-ous, more or less criminal organizations for which he had to take on different identities. The existing research on superheroes show that there are several explanations for how and why superheroes choose their identity in certain situations. But there is no consensus on how to determine a real identity. The first part of the thesis will examine the theoretical background, first in a general understanding and then applied to superheroes and Arrow, on identity con-struction, the role of the mask, and the definition of a superhero to point out the essential fac-tors for the identity work of superheroes. Using the theory of personal identity by Jürgen Straub, which emphasizes the importance of narration, the following chapters show how the protagonist manages to construct a coherent identity for himself. In the second part, I will analyze the protagonist’s use of narration in the form of monologues and flashbacks in the context of his identity construction over the course of several years as well as his costume, which separates Oliver Queen from the superhero (Green) Arrow, the different roles and names he takes on and his relationships to other people. By telling his stories, remembering past mistakes and then acting differently in the present, he is able to combine his private with his superhero role.