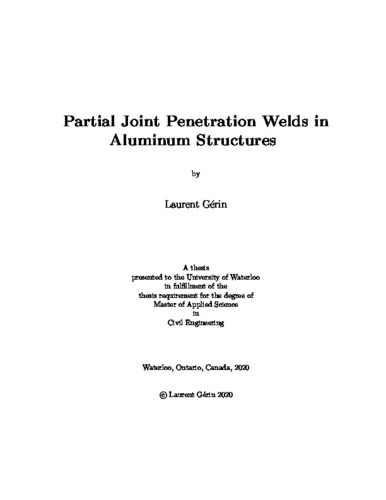 Aluminum structures are becoming more and more common in Canada and the world as engineers and decision-makers become more aware of the possibility to lower life cycle costs. Aluminum's corrosion resistance, light weight and high strength make it especially advantageous for use in pedestrian bridges and other truss-type structures. However, Canadian design codes for the use of aluminum in structures lack guidance and impose restrictions on partial joint penetration (PJP) groove welds; these welds can be very useful in the design of tubular truss-type structures. Engineers are finding that this is causing challenges in the design of competitive structures, given that some international design standards have less restrictions and provide more guidance. This thesis reports on a research project to evaluate the performance of PJP groove welds and to develop models for their use in both strength and fatigue design. These welds have been used commonly in steel structures where the full resistance of a complete joint penetration weld is not required, but essentially no literature exists on their use in aluminum. A comprehensive experimental program of almost 100 samples was undertaken, testing partial joint penetration groove butt welds. The performance of the welds was evaluated both in static (strength) and cyclic (fatigue) loading. The experimental data was also used to calibrate both strength and fatigue models, using advanced measuring technologies such as digital image correlation, which allowed for the observation of highly localized effects in small samples. Overall, it was found that current code penalties on PJP welds may not be justified. A strengthening mechanism was identified where lateral restraint is provided by the unwelded part of the joint and raises the effective strength. This comes at the expense of some ductility. Design of the welds was found to be relatively straightforward, with the strength depending practically only on the strength of the heat-affected zone. It is significantly weaker than the initial base metal strength for alloys typically used in structural applications. A major issue was however identified in the effective throat provided in the welds. All samples, sourced from three different fabricators, had effective weld throats much smaller than specified, causing a major concern for the safety of these welds. Further research is required to ensure that the minimum dimensional parameters required by the welding codes such as the groove opening angle are adequate. Rigorous testing and qualification procedures may be required to mitigate negative impacts of the less-than-expected effective throat until more research is conducted. In fatigue loading conditions, the PJP welds had a relatively short life. After a statistical analysis of the test data, it was shown that the PJP welds would likely be considered to be in the weakest or second-weakest fatigue detail categories in the North American design codes. In Europe, design specifications specifically provide details for PJP welds loaded in fatigue; these specifications were found to correspond well with the test data. A fracture-mechanics based model was developed to predict the performance of the welds for a broad range of dimensional parameters. It was found that over a wide range of PJP weld sizes (20-80\% of the weld thickness), the fatigue performance did not vary significantly with the degree of penetration when the stress range was defined over the net cross section of the weld. This greatly simplifies design for engineers, as a single design stress-life curve may be used to conservatively and accurately assess the design life of a component instead of using more complex models. The model also showed that eccentricities from effects such as warping during welding significantly affect fatigue performance by precipitating crack growth to one side of the plate. It was also found that welding defects generally had little influence on the performance of the welds, due to the extreme notching effect from the lack of penetration inherent to a PJP weld. Lastly, the research program was extended to include flare-bevel groove welds, a specific type of PJP weld, which is most often seen in tubular connections. However, due to the COVID-19 pandemic and related laboratory shutdowns, the testing program was delayed at the time of writing this thesis. Preliminary results indicate similitude in behaviour between PJP butt welds and flare-bevel groove welds.