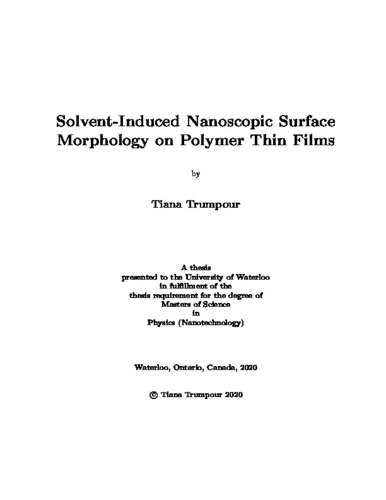 Polymer thin films are studied extensively due to their important applications in the fields of material coatings, biomedical devices, nanoelectronics, and more. Many of these applications directly depend on the surface properties of the films as this may influence the efficacy or properties of the resultant mechanism. The usual methods to create and use thin films involve the application of solvents to the surface. Processes such as nanolithography apply solvents of a poor quality to the thin films as a form of washing, with the expectation that no lasting effects will be present on the surface. However, this thesis proves that a nanoscopic morphology is resultant from the application of poor solvents to the surface of polymer thin films. It has been shown that the morphology exhibits a characteristic length scale which is independent of the poor solvent used and independent of molecular weight at large chain lengths. Finally, a physical model of lateral instability has been proposed which provides a descriptive driving mechanism of the morphology.