Contribution of Point Source Inputs of Phosphorus from a Bunker Silo in a Small Agricultural Watershed in Southern Ontario, Canada 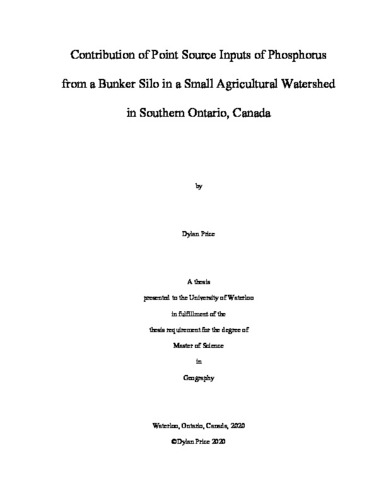 Nutrient losses from agricultural operations contributes to the issue of eutrophication of freshwater systems. Although many studies have been conducted on diffuse nutrient losses from fertilizer application, there is a paucity of studies on point source phosphorus (P) loss from bunker silos. Furthermore, the build-up of legacy P in the landscape from historical land management practices can create critical source areas of P that contribute to P loads long after those practices cease. The goal of this thesis is to quantify the contribution of a dairy farm (dominated by bunker silo losses) to watershed P losses, and to monitor P concentrations in surface and groundwater across a riparian zone to characterize the sorption potential of its sediments and infer whether the riparian zone may be acting as a sink for P, or a source of previously retained (legacy) P to the stream. Stream discharge was monitored continuously throughout the study, and automatic water samplers were deployed in the stream above, and below the bunker silo to analyze soluble reactive P (SRP), total dissolved P (TDP), and total P (TP) on an event basis. The riparian zone was equipped with a series of nested wells and piezometers along a three transects to monitor groundwater P levels, and to determine the hydraulic conductivity of the riparian groundwater. A transect was also installed on the unaffected side of the transect as a reference. The farmyard contribution to watershed P losses over a one-year period was 32% (SRP) and 22% (TP). Cumulative loads over the entire study suggest that the farmyard P losses were 21.2 kg/ha SRP and 120 kg/ha TP. Peak P concentrations occurred during snowmelt and thaw events and were smaller during periods of baseflow. However, after the bunker silo was refilled in mid-summer months, both SRP and TP were considerably elevated. Large amounts of P were found to be stored in the riparian soil, however, estimated contributions of riparian P to the overall loads were negligible. This may be a result of missed flowpaths during site set-up, or an occurrence of upwelling of P in the streambed. The results of this research suggest that this particular farmyard bunker silo contributes large amounts of P to the adjacent stream on an annual basis. This study should be used as a starting point for future studies examining livestock farmyard nutrient losses.