Challenges in epidemiological modelling: from socio-virulence dynamics to HIV interventions in MSM populations. 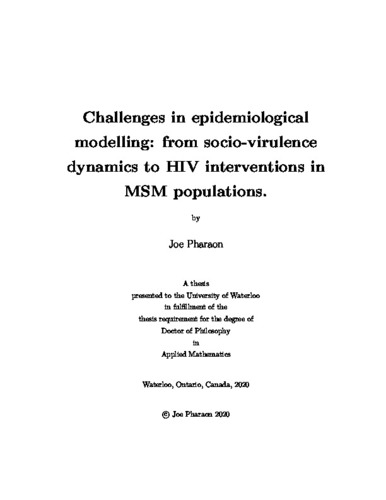 The spread of infectious diseases is one of the biggest challenges that public health faces nowadays. Their control is often not an easy task. Social behaviour plays an important role in disease prevention. However, the complex interplay between social behaviour and transmission dynamics is still not very well understood. This thesis tackles this topic by introducing a dynamic variable representing social behaviour that is coupled with epidemiological compartmental models. Under certain conditions, social behaviour can greatly impact the outcomes of an emerging virulent pathogen and thus it is necessary to explicitly model social behaviour for better understanding of transmission dynamics, and better and more accurate predictions. The Human Immunodeficiency Virus (HIV) is a disease that attacks the immune system of its host. Since its emergence in the 1970s, it remains an epidemic that disproportionately affects gay and bisexual men who have sex with men (GbMSM). While diagnosis and treatment procedures kept improving, it still poses a public health concern. The introduction of Pre-Exposure Prophylaxis (PrEP) as a preventive drug in Canada in 2015 was a crucial step to help with decreasing HIV prevalence. PrEP however doesn't prevent the transmission of bacterial sexually transmitted infections (STIs). Previous studies have found a positive correlation between the increase in PrEP use and the decrease of condom usage. We investigated conditions under which the prevalence of bacterial STIs remains low under a PrEP regimen and we found that population level annual testing is essential for risk mitigation. While PrEP has a great potential in reducing HIV prevalence, its impact might not be as strong as that created by frequent testing. In a final study, we examined different strategies, that are season specific and risk level specific, to derive an optimal strategy that aims to reduce HIV prevalence in Toronto by 2050. Given that higher risk sexual behaviour is more observed during the summer months, we concluded that testing the entire population twice during the summer is the most effective way to get a low HIV prevalence subject to plausible levels of testing and PrEP recruitment.