The fascination of apocalypse: A cultural comparison of Canadian and Central European imaginations 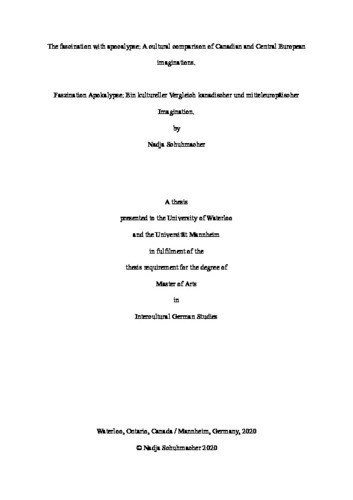 The modern time seems to be fascinated by the imagination of apocalyptic scenarios. This master thesis aims to analyse apocalyptic fiction from authors of Canada, Austria and Germany and draw a comparison between the subject of the stories, the linguistic style as well as cultural implications made within the narration. As theoretical basis the work is using cultural and historical implications in the chosen countries as well as Klaus Vondungs theory of a ‘kupierte Apokalypse’- the apocalypse without the biblical revelation - which builds the foundation of the analysis. The methodical approach is using the ‘Cultural Theory’ by Mary Douglas and the ‘6 Dimension Model of National Culture’ by Geert Hofstede to analyse cultural characteristics in the different countries examined, and represents the question of cultural coded specifics of apocalyptic fiction. Five narrations form the basis of the interpretative work and represent the countries listed above. ‘Die Arbeit der Nacht’ written by Thomas Glavinic and ‘die alarmbereiten’ by Kathrin Röggla represent the Austrian literature; ‘Station Eleven’ by Emily St. John – Mandel and Oryx and Crake written by Margaret Atwood stand for the Canadian literature. The last novel ‘Der Schwarm’ by Frank Schätzing is the only apocalyptic narration written by a German author during the 21st century and is broaching the issue of a lack of German literature in this field since the end of the last century. The analysis is showing the correlation of the cultural background of the author and its imagination of the end of the world. It is possible to find clear evidence of a cultural code implemented in the narrations which is showing different point of views and various focal points. The final chapter of the thesis is broaching the issue of literature as interpretative medium for social issues as well as preservation of cultural and historical specifics. It is following an application on the Corona Virus crisis during 2020 and is showing how wording is draws a comparison between the pandemic and an apocalyptic situation.