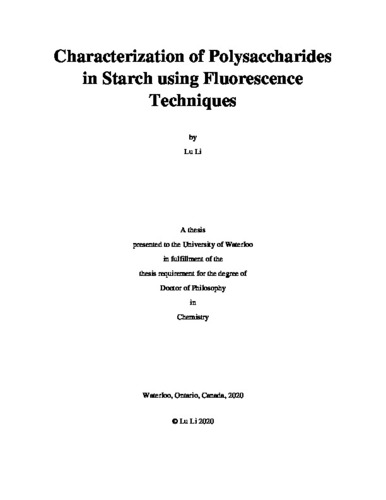 Amylose and amylopectin, which are the two main constituents of starch, were characterized using the pyrene excimer fluorescence (PEF) technique. First, an amylose sample was randomly labeled with the dye pyrene to yield Py-Amylose. Its fluorescence was compared to that of pyrene-labeled poly(methyl acrylate) (Py-PMA) as Py-PMA was expected to experience internal dynamics that were much faster than those of Py-Amylose. Analysis of the PEF signal revealed that Py-Amylose formed excimer as effectively as the more flexible Py-PMA. This result could only be rationalized if Py-Amylose generated a compact environment for the pyrene labels by adopting a helical conformation. Fluorescence blob model (FBM) analysis, where a blob is the subvolume inside a macromolecule probed by an excited pyrene, yielded a blob size (Nblob) of 11 anhydroglucose units (AGUs) for Py-Amylose. The experimental Nblob value matched the theoretical Nblob value obtained by molecular mechanism optimizations (MMOs) only if the pyrene labels were assumed to be covalently attached onto a polysaccharide helix, thus confirming the helical conformation of amylose in DMSO. Second, the FBM analysis was applied to a sample of amylopectin randomly labeled with pyrene (Py-Amylopectin). Nblob was found to increase from 11 for Py-Amylose to 20 for Py-Amylopectin in DMSO. MMOs were carried out to establish how theoretical Nblob varied with the interhelical distance (dh-h) between single and double helices of oligosaccharides laid out in a hexagonal array used as a mimic for the arrangement of the side chains of amylopectin. The dh-h value needed for Nblob to match the experimental Nblob of 20 equaled 25 or 29 Å depending on whether the side chain adopted a single or double helical conformation, respectively. This interhelical spacing suggested a density of amylopectin in DMSO which was one order of magnitude larger than the density of amylopectin determined by intrinsic viscosity ([η]). To resolve this discrepancy, the Solution-Cluster (Sol-CL) model was proposed. In this model, the interior of amylopectin was depicted as being a network of dense clusters of oligosaccharide helices connected by flexible and linear oligosaccharide segments. Third, nanosized amylopectin fragments (NAFs) prepared from waxy corn starch by high temperature extrusion were characterized by proton NMR, iodine binding test, viscometry, dynamic light scattering (DLS), and PEF. Proton NMR indicated that the NAFs shared a same chemical composition with amylopectin. The iodine binding test experiments confirmed that the NAFs were essentially amylose-free. [η] measurements suggested that their density increased from 0.04 to 0.12 g/mL in DMSO as their hydrodynamic diameter decreased from 57 nm to 8 nm. Matching the experimental Nblob value of Py-NAFs with the theoretical Nblob-vs-dh-h trends yielded dh-h values that led to densities close to that found for amylopectin. In addition, the density of the NAFs, determined from [η] approached the density values calculated from Nblob as their size decreased toward that of a cluster of helices. This result suggested that the linear segments that bridged the clusters of helices and contributed to the excluded volume of the NAFs were cleaved off as the NAFs became smaller. Poly(ethylene glycol)s (PEGs) of different lengths were then added to dilute dispersions of Py-Amylopectin and two Py-NAFs. 10K PEG was unable to penetrate the interior of the macromolecules, thus generating the osmotic pressure that compressed the polysaccharides. Shrinkage of the polysaccharides was monitored by measuring their PEF. Deformation of the polysaccharides was found to only occur in Py-Amylopectin and the larger Py-NAF. The smaller Py-NAF could not be compressed at the same 10K PEG concentration due to the absence of excluded volume. These conclusions provided further supports to the Sol-CL model. Together the results presented in this thesis suggest that PEF provides reliable structural information on amylose and amylopectin in solution, an information that would be difficult to extract from more traditional characterization methods.