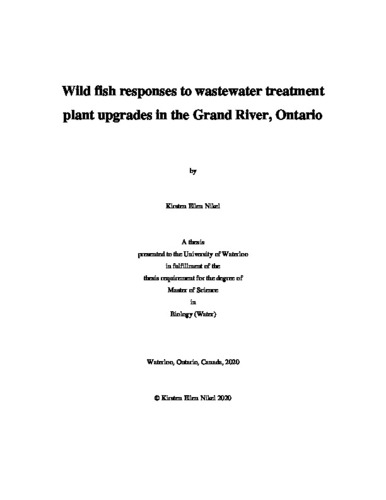 Municipal wastewater treatment plant (WWTP) effluent is a major point source of contaminants (nutrients, pharmaceuticals, estrogens, etc.) which can harm aquatic life. Many studies have investigated the effects of WWTP effluent on male rainbow darter (Etheostoma caeruleum) collected downstream of two WWTPs in the Grand River, Ontario. These studies reported disruption at multiple levels of biological organization, including altered vitellogenin gene expression, lower levels of in vitro steroid production, and high frequency of intersex. The Region of Waterloo has invested in major upgrades at both WWTPs to improve effluent quality by increasing aeration and nitrification with the goal of reducing ammonia concentrations in the effluent. The Kitchener WWTP was initially upgraded in early 2013 with additional aeration/nitrification and extended solids retention time. After these upgrades, stable nitrogen isotope signatures in muscle tissue and in vitro steroid production of 11-ketotestosterone and testosterone in fish collected downstream of the outfall shifted to resemble upstream reference conditions, and there was a significant reduction in intersex incidence and severity. Upgrades to the Waterloo WWTP in 2017 and 2018 created a unique opportunity to investigate whether responses in rainbow darter previously associated with effluent exposure will resemble upstream reference levels following upgrades at a second WWTP. The biological endpoints in rainbow darter downstream of the Waterloo WWTP were not as severe as they were in fish downstream of the Kitchener WWTP but there was still potential for recovery. This thesis aimed to compare stable isotope signatures, in vitro steroid production, and intersex in rainbow darter caught upstream and downstream of the Waterloo WWTP before and after it was upgraded, to explore any changes that might occur following the upgrades. After the Waterloo WWTP upgrades were completed, there was a similar but less pronounced recovery and these endpoints were no longer statistically different from the upstream reference sites. However, it was often difficult to attribute these biological effects on fish directly to the changes in the WWTP effluent due to the variability in the endpoints among study sites, including the upstream reference sites. This unique long-term study is also valuable in explaining confounding effects of annual variations in water temperature and flow, as well as inputs from other sources which can mask or exacerbate the effects of the WWTP effluent. Overall, major capital investments in WWTP upgrades targeted at improving effluent quality have also corresponded with the reduction of adverse responses in fish.