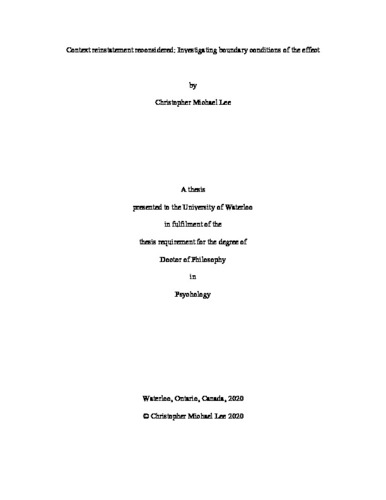 The context reinstatement (CR) effect suggests that target items are easier to recognize when encoding and retrieval contexts are matched. In this PhD thesis, I manipulated features of the target and the context, in target-context pairs, to examine the boundary conditions of the CR effect. In Experiments 1-3, I investigated whether familiarity with the target item would influence the CR magnitude for target words (Experiment 1), objects (Experiment 2) and faces (Experiment 3). Familiarity was manipulated using a pre-exposure phase during which participants viewed targets either 0, 1, 3 or 10 times. During a later encoding phase, targets were paired with a unique indoor or outdoor scene and participants indicated how likely the target and context matched. During a retrieval phase, targets and lures were presented during each trial of a recognition test, paired with either the same, or with a new context. A significant CR benefit was observed for target words (Experiment 1) and objects (Experiment 2), and the pre-exposure manipulation did not influence the magnitude of the memory benefit, in line with ‘global matching’ models of memory. Importantly, I observed a significant reduction in the CR benefit for faces (Experiment 3) that were highly familiar, that is pre-exposed 10 times, compared to 0 times. In Experiment 4, I reduced the number of pre-exposures in the most familiar condition, from 10 to 5, to rule out the possibility that a ceiling effect, for face memory performance, could account for this finding. Again, I observed a reduction in the CR benefit for faces that were highly familiar, in line with an ‘outshining’ model of memory. In Experiment 5, I investigated an attentional account for this stimulus specific effect on the CR benefit to memory. Participants completed a paradigm similar to that used in Experiments 1-4, but memory was assessed for target words and faces in separate blocks in a within-subjects design. Prior to each block, eye gaze was calibrated with an eye tracker as an indirect measure of overt attention. Replicating my previous findings, the CR benefit for target faces gradually diminished as familiarity (number of pre-exposures) with the face increased. Importantly, eye tracking data gathered during the encoding phase revealed that for face-context pairs, a higher proportion of fixations and dwell time was placed on the face than the context. The opposite pattern was revealed for word-context pairs. Results suggest that devoting more attention to the context than the target, during encoding, may engender a necessity for context to inform memory decisions, accounting for the consistent benefit of CR on memory for target words, but not target faces. Faces, in contrast, are not as reliant on context to guide memory performance. In Experiments 6 and 7, I investigated whether the anxiety-provoking nature of a context scene might influence the CR benefit to memory. During encoding, participants viewed target faces paired with scenes validated as either highly anxiety-provoking or not, half of which contained other faces embedded within the scene. At retrieval, target faces were presented again with either the same or a new context scene. The expected CR benefit was observed when the contexts were low-anxiety scenes or high-anxiety scenes without embedded faces. In contrast, the CR benefit was significantly reduced when the contexts were high-anxiety scenes containing embedded faces. Results suggest that the benefit of reinstating a context, on memory for target faces, depends critically on semantic characteristics of the reinstated context. My PhD research suggests a refinement to the classic CR effect: it applies primarily to memory for words or objects and for faces that are relatively novel. When faces are familiar, or encoded in highly anxiety-provoking scenes, other factors, such as target signal strength are more important in guiding recognition memory decisions.