The Dynamics of the Beaufort Gyre 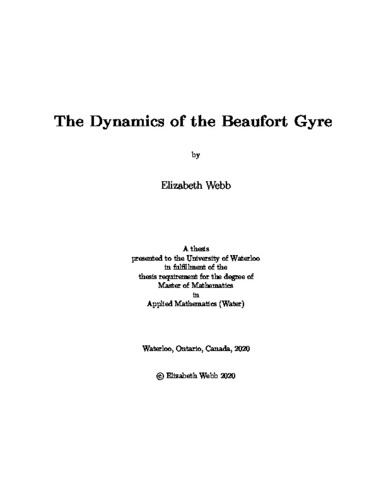 The Beaufort gyre is located in the Canadian Arctic basin and is responsible for the dominant circulation of the Beaufort Sea. Currently, the gyre flows in an anti-cyclonic direction, which leads to the deflection of fresh water from melting sea ice into the centre due to the Coriolis force. However, every 5 - 7 years it has been observed to reverse direction and release the collected fresh water into Transpolar Drift, towards the Northern Atlantic Ocean. The last recorded reversal was over 20 years ago, and the Beaufort gyre now holds as much fresh water as all the Great Lakes combined. When the next reversal happens, it is predicted that the fresh water will be released and then act as a thick, cold blanket over the Northern Atlantic Ocean, preventing heat transfer to the atmosphere, and greatly affecting the European climate and fisheries. The research in this thesis aims to understand the structure of the Beaufort gyre and how it might destabilize and give rise to eddies. Eddies are known to be very effective in mixing the deep Arctic ocean water with the cold fresh surface water, which could lead to the increased melting of the floating sea ice. In this work we develop numerical tools that can be used to study both the classical wind-driven gyre problem, and also an idealized Beaufort gyre. We use the reduced gravity, Quasi-Geostrophic model, which accounts for the effects of the rotation of earth, wind forcing, bottom drag and lateral viscosity. The solutions are computed using Firedrake, a finite element method library, and we examine how the structure of the steady solution depends on varying values of bottom drag, the beta effect and stratification. Subsequently, we investigate the linear stability of the gyre. Unfortunately, we were not able to simulate winds that are as strong as are observed and as a result did not simulate any instabilities, but the tools have been established for future research.