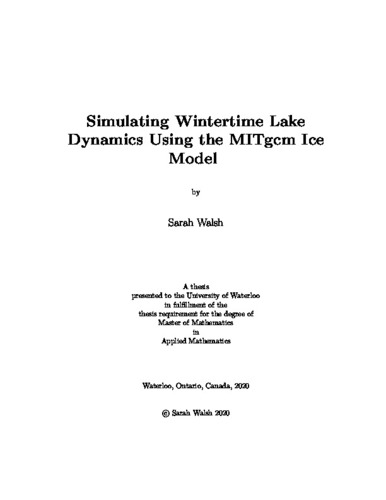 Lake Erie is an important source of drinking water, a location for recreational activities and a haven for unique ecosystems (e.g. Point Pelee). Recent research has suggested that some wintertime processes are significantly increasing amounts of hypoxic water and harmful algal blooms found in the lake during the following summer. Much of the mixing in Lake Erie is caused by wind forcing. Mixing also occurs via an unstable water column that results from incoming solar radiation when water is below the temperature (around 4 degrees) at which the maximum density occurs. This thesis reports on several highly idealized lake ice simulations using MITgcm (Massachusetts Institute of Technology General Circulation Model). The MITgcm is a 3D ocean model with the ability to model sea ice that was specifically chosen for this work because of its fully nonhydrostatic capabilities. This work was carried out with the intention of gaining a clear understanding of the MITgcm and some of its packages so that the model may be confidently applied to future work involving Lake Erie. In this thesis, we consider small rectangular lakes with a partial ice cover of constant thickness. We vary several parameter settings for our simulations including initial surface temperature, air temperature, incoming shortwave and longwave radiation, wind forcing, rotation, horizontal domain size, and horizontal resolution. We also carry out simulations using the fully nonhydrostatic version of the MITgcm as well as simulations using hydrostatic approximation. Results from this work suggests that the ice cover acts as a barrier between the wind forcing and the surface of the lake. We observe that the surface currents are generally much weaker in ice-covered regions. Applying the hydrostatic approximation results in less symmetry among the surface currents. Lakes with larger horizontal domains require more time to force a proportional amount of ice across the lake compared to smaller lakes under similar forcing, there is also less ice pile-up observed in the larger lake in terms of height. Rotation also appears to have more influence over larger lakes compared to smaller lakes. Overall, the simulations behave as expected, however some results have been puzzling, such as noise occurring in the net upward heat flux for larger lakes. This thesis also discusses issues we have faced with the model, which includes ice growth during above freezing temperatures, ice remaining stagnant due to strange behaviour of momentum solvers, and confusion surrounding the model's computation of net upward shortwave radiation.