Building healthy cities in the global south: A case study of the City of Lahore, Pakistan 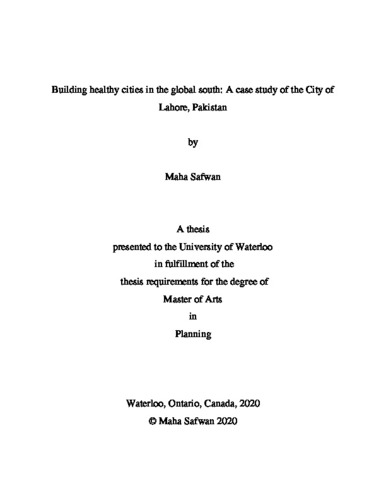 Building healthy urban communities is one of the most important challenges countries around the world are facing. The industrial revolution and current technological advancements have resulted in the rapid urbanization of human settlements. Over time, these urban centres are deteriorating, increasing related urban health issues particularly in the low- and middle-income countries of the global south. Now, the world is experiencing the fastest urban growth in human history while cities in the global south are urbanizing faster than those in the global north (which are already predominantly urbanized). Explicit consideration of urban health is often ignored in urban planning practice, especially in the global south. Through urban design guidelines and policy initiatives, municipal planning becomes a tool with the potential to guide and promote health-friendly built environments. This research uses the conceptual framework developed by Giles-Corti and colleagues (2016) as the foundation for understanding how urban, built environments and transportation attributes affect health. It examines how policy and design in municipal plans can be useful tools in fostering active transportation as well as accessible health services, education and public spaces. This thesis begins by highlighting the differences between urban health issues in the global north and the global south. It then describes the qualitative method and document analysis used to identify urban health issues in the case study City of Lahore, Pakistan. It also provides recommendations on how Lahore can undertake actions to improve health by identifying the barriers to and facilitators of urban health. The study reached saturation after 10 urban planners from the public and private sectors were interviewed. The findings of this study indicate that Lahore’s land use plan implicitly considers health in its policies while the transportation sector plan provides some explicit policies that promote a healthy urban environment. Despite this, both plans are missing strategies on how to implement these policies. Results from key informant interviews reveal similar findings regarding the current urban environment and the master plan’s capacity to facilitate a healthy built environment. Informants emphasize that the barriers to implementing healthy urban planning are predominantly the lack of political will and funding. This research provides a basis for future studies on Pakistan’s process for developing a master plan that results in a healthy city.