The Caravan Citizens: Spatial resistance and resilience in the refugee camp of Za’atari - a Graphic Novel 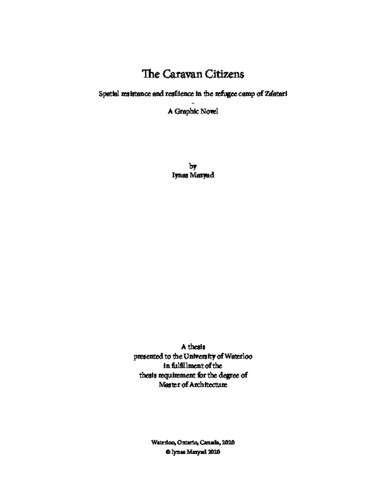 In the realm of refugeeism, camps can be perceived as places that sustain the lives of displaced humans, vulnerable environments that contain passive recipients, or territories of sovereign power that enforce state-sanctioned limits on refugees’ freedoms. These three approaches, as observed by humanitarian agencies, media producers, and theorists do not only encompass camp’s control, and planning strategies, in the social, humanitarian, and political fields but also determine the participation of architecture in the discourse on emergency communities. Architecture incarnates the humanitarian essence in these type of shelters, the temporality of the camp in providing transitional housing, and the exclusion in the spatial and urban characteristics. Nevertheless, camps can be perceived through a deferent architectural lens from the street level: architecture as a construct for coping with drastic cultural, social, economical, and political change. In this thesis, I highlight the planning and developing systems that are created by the camp’s authorities and investigate architecture as a response to them in the case of Za’atari camp in Jordan. Syrians who resettled in Za’atari reshaped the settlement they resided in for survival, resiliency, and power. They changed the urban fabric of the camp, deformed their dwellings to develop, humanize and privatize their houses, and created spaces that afforded them a political agency, economical, and leisure source. These architectural creations provide insight for understanding the dynamism of life in refugee camps and an analysis of the human behavior of refugees. In the format of a graphic novel, I outline the evolution of these residential typologies through time, seeing them as stemming from rapid changes to life in Za’atari camp. I illustrate fictional case studies informed by media, documentaries, and inspirations from real testimonies from the Camp. The novel explores several aspects of the camp’s evolution from inside out since the camp’s establishment in 2012 until the urban fabric settled in 2016. This includes displaying key aspects of daily life, the relationships between fellow refugees and the camp’s government and the refugees’ perspectives on their legal status and the place they moved to. In this thesis, I document and explore Syrian refugees’ spatial techniques for adaptation in Za’atari camp in Jordan. I study how spatial deformations provide stability, normalcy, humanization, and political agency in the camp. In the format of a fictional graphic novel, I embed the camp planning system, the refugees’ interventions in developing their dwellings, and the factors that influenced the refugees’ spatial decisions.

Iynas Mazyad (2020). The Caravan Citizens: Spatial resistance and resilience in the refugee camp of Za’atari - a Graphic Novel. UWSpace. http://hdl.handle.net/10012/16350