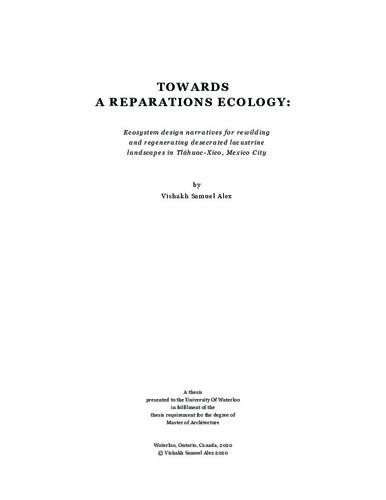 For centuries, built environments have been instrumental in imposing an anthropocentric system that has separated nature from human civilization. In retrospect, this dualist structuring of man and nature stems from land practices that were homogenized across the world through colonialism. Colonial practices have appropriated land, culture and ecology for extraction and accumulation. Until only a couple of centuries ago, more than eighty percent of the entire world was colonized by European imperial powers. Although most of these regions have gained autonomy since then, colonial power structures are still dominant in impeding possibilities for a viable and ecologically sustainable future for all. The region of Tláhuac-Xico (Chalco) in Mexico City presents a complex set of socio-ecological issues whose origins can be traced back to colonial land practices. Before colonization, the region existed as a lacustrine ecology centered around Lake Chalco and sustained prehispanic civilizations through centuries. These civilizations thrived by forging symbiotic relationships with land, water, and nature through engineered hydraulic systems. They had no intention of defiling the natural environment for survival. Instead, they were agents in upholding a socio-ecological landscape that was rooted in conserving, enriching, and beautifying the lacustrine ecology they inhabited. In contrast, Spanish colonists who arrived in the early 16th century unleashed a system that led to the desiccation of the lakes. In its place emerged a ‘modern’ metropolis that continues to extract and appropriate from lands usurped from indigenous communities. Colonial land practices led to the devastation of indigenous communities whose lives and livelihoods were woven into the lacustrine ecology. The repercussions of colonial practices continue to manifest as social and ecological disasters even today. In 1988, Lake Chalco re-emerged as Lake Tláhuac-Xico due to land subsidence and seismic activity. The return of the lake presents a hopeful possibility for indigenous communities who have throughout centuries resisted the cultural and ecological appropriation of the ex-lacustrine region. The term ‘reparations ecology’ hypothesizes a new model for making amends to grave errors of the past by rethinking relationships between human society and natural ecology as mutually constituting each other. Through an elaborate ecosystem design narrative, the thesis explores a potential ‘reparations ecology’ in Tláhuac-Xico (Chalco) that is rooted in rewilding and regenerating desecrated lacustrine landscapes that once thrived in the region. The result envisions methods of design that present architectural capacities through the lens of decolonization.