IF STONES COULD SPEAK Destruction, Preservation and Memory the case in Kosovo and Metohija 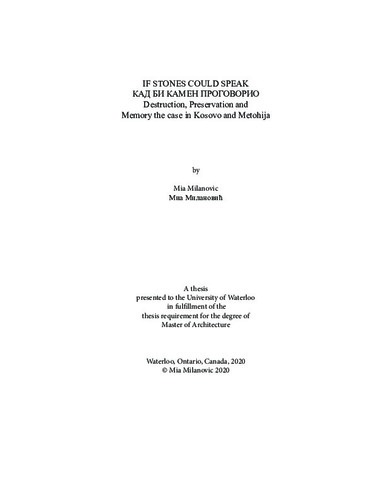 According to the International Center for Transitional Justice, 145 known churches and monasteries in the autonomous province of Kosovo and Metohija(KosMet)* were partially or completely damaged after the Kumanovo Agreement (an accord that concluded the war in the region on June 9th, 1999) was signed. As most of the sites still remain in ruins and a lack of proper documentation on them has been done or made public, how can the collective memory of their architectural, historical, and cultural importance be restored before it fades away? When researching on this topic the number “155” (some were attacked, restored, and attacked again, thus resulting in a larger number than the above stated one) is repeated in news and in literary works. However, only 30 by name are available to the general public and even less when searched for in English. “If Stones Could Speak” would bring to light the missing and suppressed documentation. Through a curated exhibition of the suppressed documentation in the form of text, photographs, drawings, videos, carefully designed digital models, and audio tour this thesis will attempt to restore the collective memory. By communicating with archeologists, architects, monastic figures, and locals of the region, the needed research for the exhibition has been obtained regarding the suppressed documentation as well as first-hand perspectives in order to curate a proper exhibition. There are four churches/monasteries belonging to the Serbian Orthodox Church in KosMet already under the protection of UNESCO, this thesis and exhibition would show that the ones fading from memories deserve the same respect and recognition. The hope is that this thesis can start a dialogue on what peace should really look like for this region. *also known as the partially recognized Republic of Kosovo

Mia Milanovic (2020). IF STONES COULD SPEAK Destruction, Preservation and Memory the case in Kosovo and Metohija. UWSpace. http://hdl.handle.net/10012/16348