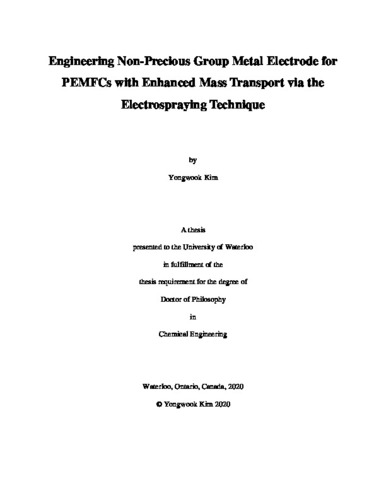 Ever since the concept of “Hydrogen Economy” emerged, fuel cell technology has been regarded as the key component of the clean, sustainable energy future. Thanks to great successes in the development of fuel cell technology in recent years, they are now transitioning from R&D stage to the commercial stage. Some of the major automotive companies such as Toyota and Honda have already commercialized the fuel cell vehicles. Recently fuel cell technology has emerged as an appealing technology in heavy-duty automotive industry due to its high-power output, fast fuel charge, long driving range and light weight. Currently, most commercialized fuel cell stacks either use Pt/C or Pt-alloy catalysts which makes up as much as 40% of the stack production cost. It is clear that for further market penetration the stack cost needs to be reduced by using less or no platinum. Recent advances in non-Precious Group Metal (non-PGM) catalysts have provided hopes to completely remove the expensive Pt from the stack. There has been great progress in the development of non-PGM catalysts, but they are still less catalytically active than Pt, and to compensate for low catalytic activity, higher catalyst loading is required resulting in much thicker electrodes. Thicker electrodes suffer from increased transport resistances, so careful design of the electrode is required to further improve the performance of the non-PGM materials. This thesis aims to address this issue by providing insights on how to engineer the non-PGM electrode. The work was carried out in three stages. First, the optimal composition of the non-PGM cathode was investigated using a single-phase, non-isothermal model. A comprehensive parametric study of catalyst loading, Nafion™ loading and thickness was carried out under realistic fuel cell operating conditions. This study revealed that the optimum catalyst loading was about 3.0-4.0 mg\/cm^2 whereas 70% Nafion™ was found to be the optimum. In the second stage, due to lack of available tool to characterize the mass transport characteristics of thin porous materials, such as the catalyst layers, a novel method was developed which requires no gasket making it appealing to thin catalyst layers. The method was thoroughly validated with open air and some of the traditional porous media. In the final stage, the non-PGM catalyst layers were fabricated, and their structural properties were analyzed. Properties such as pore size distribution, specific surface area and porosity were determined as well as the tortuosity using the novel method developed herein. Generally, electrosprayed non-PGM catalyst layers showed vastly improved mass transport characteristics owing to high porosity as well as increased average pore size. An empirical tortuosity-porosity relationship was also derived for electrosprayed non-PGM catalysts which would be valuable in the future modeling studies.