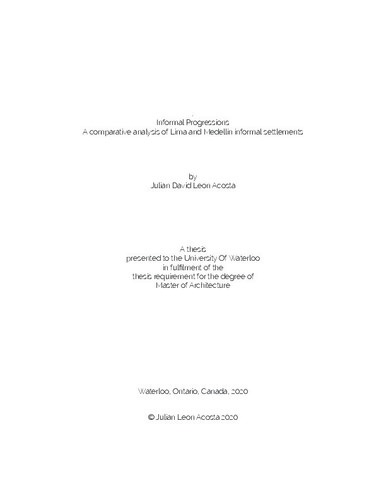 Latin American cities have seen significant demographic growth during the second half of the 20th century. As this expansion was unable to find a formal apparatus for its incorporation into the city, much of it was established through self-produced informal settlements. These settlements have now grown to cover 30% of Latin American cities and have become an alternative for low-income populations seeking to establish themselves within a city. The main goal of this thesis is to carry out a comparative analysis between the cities of Lima and Medellin as centers for applying various ideas and concepts concerning the development of informal settlements throughout Latin America and thus test a hypothesis regarding whether informal settlements can be a valid alternative for future urban development. Said analysis has been divided into 3 phases. The first phase consists of reviewing the past historical development of informal settlements inside these cities. A second stage is focused on studying the current conditions of such settlements by relying on an urban, socio-economic, demographic and territorial approach that aims to uncover the intersecting links between these elements and their connections to the production of the informal city. Finally, the analysis also seeks to outline future projections for possible areas of informal development by using a basic agent-based model that relies on both the data and the patterns resulting from the study undertaken. The conclusion of the analysis is that informal settlements remain one of the best alternatives for low-income people to settle in the city.