Microbiology of Barrier Component Analogues of a Deep Geological Repository 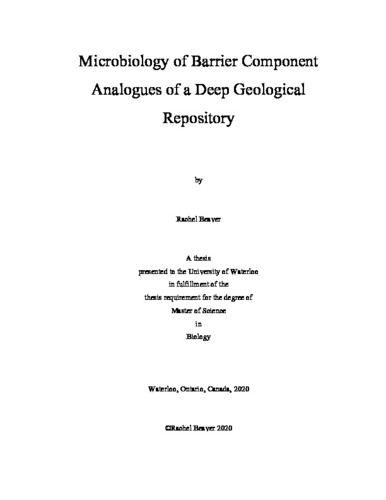 Many countries are in the process of designing and implementing long-term storage solutions for used nuclear fuel. Like many of these countries, Canada is considering a deep geological repository (DGR) wherein used fuel bundles will be placed in copper-coated carbon steel used fuel containers encased in bentonite buffer boxes. Previously published research has simulated aspects of a DGR experimentally to identify DGR conditions that would prevent microbial activity. Although such microcosm-type experiments can observe microbial growth and activity over relatively limited time frames, a DGR will remain functional for at least a million years, and will be exposed to fluctuating environmental conditions. To address these temporal limitations, there is value to examining ancient natural barrier components that serve as analogues for future DGR components. My research explored the abundance, viability, and composition of microorganisms in ancient natural DGR barrier component analogues using a combination of cultivation- and DNA-based approaches. Samples were obtained from the Tsukinuno bentonite deposit (Japan) that formed in the late Miocene (~10 million years ago), the Opalinus clay formation (Switzerland) that formed approximately 174 million years ago, and Canadian shield crystalline rock from Northern Ontario. Given sample logistics and site-access considerations, most cultivation and molecular analyses focussed on the Tsukinuno bentonite clay samples, although the other site samples were included for comparison using a subset of techniques. Aerobic heterotroph abundances were relatively low for all Tsukinuno bentonite samples, ranging from 4.1 x 101 to 1.1 x 104 colony forming units per gram dry weight (CFU/gdw). Anaerobic heterotrophs were only detected in half of the Tsukinuno bentonite samples and ranged in abundance from 4.5 x 101 CFU/gdw to 9.9 x 102 CFU/gdw. Sulfate-reducing bacteria were only detected in one sample by cultivation, with a very low estimate of 5 MPN/gdw. Overall, culturable microbial abundances were lower than nucleic acid targets detected by quantitative PCR (Wilcoxon signed ranks test; p <0.05). A range of 3.2 x 101 to 7.2 x 107 (average of 5.7 x 106) 16S ribosomal RNA (16S rRNA) gene copies/gdw was detected in the Tsukinuno bentonite samples, and averages of 1.2 x 103 16S rRNA gene copies/gdw and 1.1 x 103 16S rRNA gene copies/gdw were measured for the Opalinus clay and Northern Ontario crystalline rock (NOCR) core samples, respectively. Because this research did not use cultivation-based approaches for Opalinus clay and NOCR samples, and PCR-based technique cannot distinguish DNA from cells and extracellular DNA, future research would be required to determine whether the detected DNA was associated with viable microorganisms. Analysis of 16S rRNA gene amplicons revealed that three of the Tsukinuno bentonite samples were dominated by putative aerobic heterotrophs and fermenting bacteria from the Actinobacteria phylum, whereas five of the Tsukinuno bentonite samples were dominated by sequences similar to those from acidophilic chemolithoautotrophs capable of sulfur reduction. The remaining two Tsukinuno bentonite samples had nucleic acid profiles below reliable detection limits, generating inconsistent replicate 16S rRNA gene profiles and probable contaminant sequences. The NOCR and Opalinus clay samples also yielded inconsistent replicate 16S rRNA gene profiles, implying undetectable nucleic acids in those rock samples and profiles indistinguishable from contaminant sequences. Total genomic DNA from Tsukinuno clay cultures was extracted and 16S rRNA genes were amplified and sequenced. Representatives of the phyla Bacteroidetes, Proteobacteria, Actinobacteria, and Firmicutes were identified in the aerobic heterotroph cultures, and additional bacteria from the phyla Actinobacteria and Firmicutes were isolated in the cultures of anaerobic heterotrophs and fermenting bacteria. Only one nucleic acid sequence detected from a culture was also detected in its corresponding clay sample, suggesting that nucleic acids from culturable bacteria were relatively rare within the clay samples. Sequencing of DNA extracted from the sulfate reducing bacteria culture revealed that the taxon present in the culture was affiliated with the Desulfosporosinus genus, which was not detected in the corresponding clay sample.