Wearable Technology and the Measurement of Physical Activity Intensity and Volume 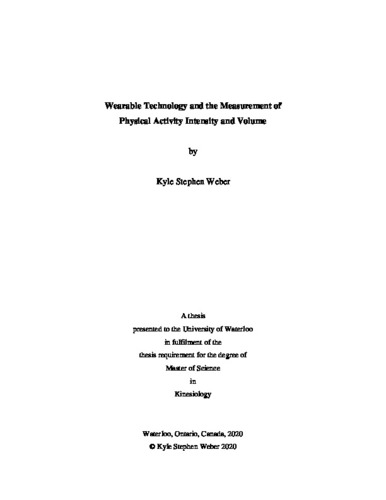 Physical activity has been linked to numerous health outcomes including a decreased risk of chronic disease and an increased quality of life; it is therefore an important component of rehabilitative and preventative programs and for tracking disease progression. Activity is often described using the Frequency-Intensity-Type-Time-Volume principle. Intensity and volume are of particular importance as they are used to relate activity to health outcomes. However, measuring intensity and volume outside laboratories poses many challenges. A new category of technology called wearables has improved the ability to objectively and continuously measure intensity and volume in free-living using accelerometers and portable electrocardiogram (ECG) sensors. Accelerometers can be worn on different body locations and have been used to estimate activity intensity and volume. However, several different analytical approaches, or models, have been used to date. Quantifying the differences in activity-related outcome measures from these different wearables models has important implications in guiding the clinical decision making involved in rehabilitation and tracking disease progression. This thesis aimed to describe the differences in total activity volume (time spent in sedentary, light, and moderate-to-vigorous activity) and moment-to-moment agreement in activity intensity measured by four wearables models, and to determine if model performance was consistent for those who were relatively active compared to inactive. These models included an existing wrist accelerometer model (Wrist), a novel ankle accelerometer model (Ankle) that used activity counts to predict gait speed, a heart rate model (HR), and a model that combined heart rate with the new ankle model (HRAcc). Data from the ONDRI@Home project’s control cohort were used. Participants wore a chest-mounted ECG and accelerometers on the wrist and ankle for a period of 5-7 days. To develop the new Ankle model, a subset of participants also performed a treadmill protocol. Data were collapsed into 15-second epochs. Only epochs when participants were awake and all devices provided usable data were included in analyses. Participants that provided less than 30 hours of usable data were excluded from analyses. Due to the volume of lost data, a subset of analyses was conducted using data from epochs where pairs of models provided valid data. Activity volumes were reported as a percentage of usable data. Moment-to-moment agreement in activity intensity was assessed using Cohen’s kappa. Significant differences in activity volume between models were found at each activity intensity. Moment-to-moment agreement in intensity was in the fair-to-almost perfect range; agreement was highest between the HR and HRAcc models, and lowest between both the HR and Ankle and HR and Wrist models. Model performance was consistent across activity levels. However, model agreement was greater for those who were more active. The Ankle model demonstrated excellent performance; activity counts explained more than 98% of the variance in gait speed and prediction error was less than .04 m s-1. Given the clinically significant magnitude of differences in activity volume and the large range of moment-to-moment agreement in intensity, physical activity outcome measures from different models should not be considered equivalent. This thesis highlights the limitations of using wearables models related to different types of activities, how devices measure intensity, and physiological differences which may have affected model performance. Many of these limitations can be overcome by multi-device models that use individualized data and relative intensity measures. Multi-device models likely have the ability to better represent activity duration, timing, and intensity and should therefore be the focus of future research.