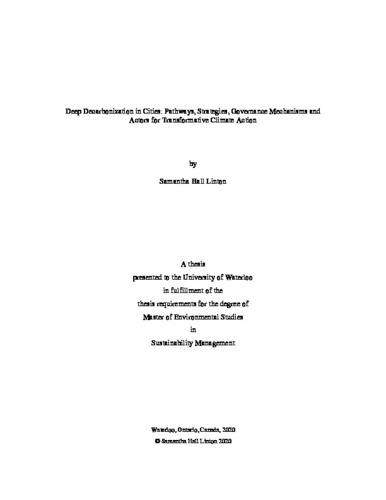 As the urgency for climate action heightens, local governments and stakeholders are developing short-term strategies and long-term pathways towards deep decarbonization at the local level. Urban areas are the largest place-based source of greenhouse gas emissions, accounting for 71%-76% of global emissions, and are projected to house 60% of the global population by 2030. Local governments have direct and indirect control of over 52% of emissions that occur within their municipalities. This study aims to qualitatively explore eight cases of best practice cities that are leading the way towards decarbonization. The eight cases are: Bridgewater (Nova Scotia, Canada), Park City (Utah, USA), Guelph (Ontario, Canada), Lahti (Finland), Vancouver (British Columbia, Canada), Oslo (Norway), Toronto (Ontario, Canada) and New York City (New York, USA). Cases were chosen based on the ambitiousness of climate action targets. Each Canadian case was paired with an international case similar in population size. The study was conducted to qualitatively explore the emerging best practice initiatives as well as highlight any patterns among the cities, depending on the population size and/or the national context. The method of qualitative investigation involved interviewing key municipal staff or plan managers on the pathways that are being implemented, the governance structures, the key actors and the tools being used for plan development and implementation. The results of this study fill theoretical gaps in the literature around the pathways that cities of different sizes are developing and the results help to provide understanding and insight on the key variables in deep decarbonization planning and implementation variables. Through identifying the key variables in the urban climate action literature, this study aimed to explore which of these were being addressed in climate action plans, and if cities were going beyond what the literature prescribed. The key research questions related to which sectors were the focus of emissions reduction pathways, what strategies were developed for plan development and implementation, how the plans were organized and governed, what key actors were involved. This study made contributions to the literature on decarbonization frameworks in six key areas by extending the literature to include new initiatives that leading cities are developing. The areas that this study contributes to are: decarbonizing the energy sector in small cities, increasing capacity of local carbon sinks, developing green economy targets and workforce development, formalizing communication structures, bottom up vertical integration tactics, and creating funding mechanisms. The findings from this study can be useful for practitioners working towards local deep decarbonization as well as transnational city networks such as C40, CNCA and ICLEI as it highlights emerging best practices.