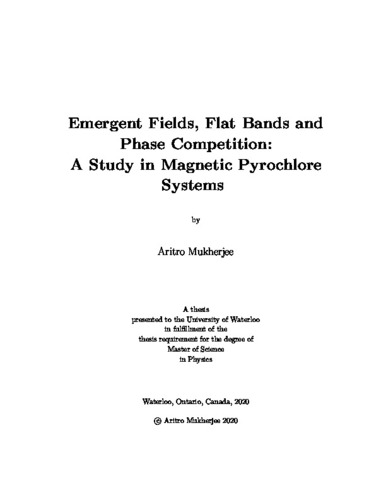 We investigate spins models on the pyrochlore and the breathing pyrochlore lattice. Specifically, we study polarized neutron scattering in classical spin ice modelled via Ising spins with anti-ferromagnetic interactions. We find that the non-spin flip channel (NSF) of polarized neutron scattering is flat (q-independent) because the neutron polarization projects the flat eigenvalues of the adjacency matrix as the (magnetic) neutron scattering intensity in the [hhl] plane, within the large-N approximation. The NSF intensity is shown to be inversely proportional to the stiffness of the emergent theory describing the system at low temperatures. We show that polarized neutron scattering probes the correlations of the emergent fluxes along and perpendicular to the neutron polarization direction. We further study the model in the presence of further-neighbour interactions and provide a prescription to obtain the Lagrange multiplier in the large-N approximation, when the NSF is not flat in such cases. In further chapters, we investigate Heisenberg spins on a breathing pyrochlore lattice (two tetrahedra of different bond lengths) in the presence of a second nearest-neighbour interaction. This interaction, leads to dispersion in the flat bands of the eigenspectrum of the adjacency matrix and results in magnetic ordered phases at the mean field level. We obtain phase diagrams (at the mean field level) for the case of constant large ferromagnetic and anti-ferromagnetic exchange coupling in smaller tetrahedron, while the exchange of the bigger tetrahedron and the further-neighbour exchange coupling are varied. We find a plethora of competing ordered phases and explore the breathing regimes of the phase diagrams. We find a hitherto unreported phase as well as a previously unreported state with sub-extensive line degeneracies in the eigenspectra.