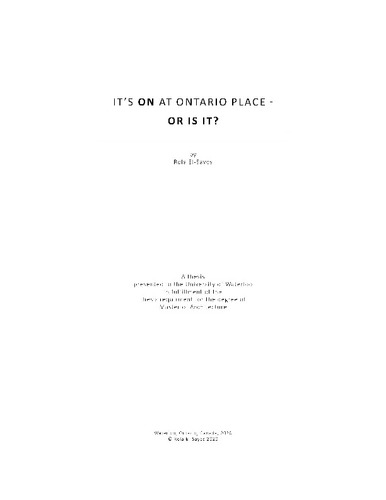 This thesis It’s ON at Ontario Place - Or Is It? addresses the roles that architecture and landscape play in shaping the waterfront and park systems into designed connected networks that respond to local, social, sustainable, economical and ecological conditions. The primary intervention focuses on Ontario Place, specifically the west and east islands. The Ontario Place islands are currently radically unused areas, a void in the waterfront and urban fabric, which splits the ground plane and limits the connection between the city’s core and its waterfront. Thus, the aim of this thesis is to intensively explore the refurbishing of the beloved landscape and social infrastructural interventions in Ontario Place through the role of re-connecting with the city and its waterfront. This would expand the perception of its performance to reintroduce social and cultural dimensions along the water’s edge. The proposal is an investigation of the role of the specialized park as an act of retrofitting and reintroducing a festival system, where the layering of both social amenities and infrastructural functions produce a composite network for Toronto and the harbour along Lake Ontario. The site of Ontario Place park is a proposal nested within in a larger series of proposals to reimagine the waterfront’s edge in attempt to create a large series of connected park spaces along the water. Waterfront and park systems present a dichotomy between the infrastructural and cultural influences that are inseparable from urban planning. Urban parks are one of the rare areas in architecture that have yet to reach their full potential in the urban fabric as a democratic, social and cultural city space. Urban parks are essentially cultural infrastructure because they shape the social environment and create city identity. Over the past decades there have been several modifications made along Toronto’s harbor and these interventions have generated spatial conditions that currently constrict the potential for urban growth. The city is focused on developing around these problematic interventions to meet its users needs in the ever-changing contemporary city.