Dwellings for the Goryan: Re-crafting Bulgarian Post-Soviet Identity at the Site of the Friendship Monument 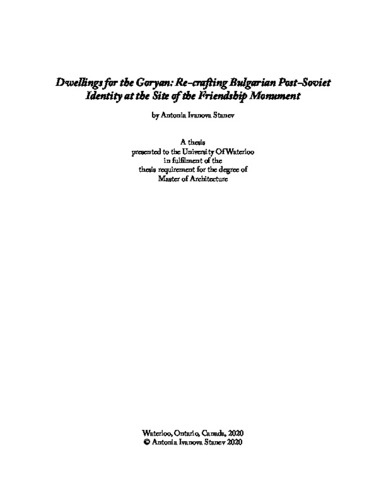 My interest begins in present day Bulgaria at the prominent site of a ruined Soviet monument which the country’s previous communist regime built in 1979. Their monuments expressed communist philosophy through their materiality, location, and architectural form. In Bulgaria’s eyes, the monuments’ physical deterioration symbolised the fall of the Communist regime and the values it represented. The country is overspread with Soviet monuments which have been alienated over time by political changes. Their presence is heavily controversial in a time when Bulgaria is trying to forge its post-communist identity by rebuilding its cultural, traditional, and historical values that the communist regime attempted to eradicate. My thesis focuses on the Friendship Monument in Varna, Bulgaria, analysing its state of decay and the grand narrative told through its architectural ideology. My research and the design followed the guidance of and reference to dissident cinema, art, and literature. I am looking to counter and re-frame the Friendship Monument in its landscape by introducing the antithetical space of communism, the heterotopia that was the Bulgarian Soviet home. In Deleuzean terms I describe the refrain of the home, one of tradition, intimacy, and identity, expressed through the home’s materiality from folklore, its micro-narratives, and the rituals occurring in its private spaces during communism. My project captures the refrain of the home through a series of architectural interventions on the site of the Friendship Monument with a focus on the tactile and the sensory rather than the visual. The resulting design re-animates traditions of folk craft and ritual of the Goryan, the local rural movement against communism, through the formal expression of the primitive Bulgarian yurt-dwelling on a site of horror and oppression that attempted to erase it. The dwelling is re-formed and re-materialised as it recounts different narratives that emerge from the roots of Bulgaria. In the process it challenges the monument’s static form and narrative.

Antonia Stanev (2020). Dwellings for the Goryan: Re-crafting Bulgarian Post-Soviet Identity at the Site of the Friendship Monument. UWSpace. http://hdl.handle.net/10012/16322