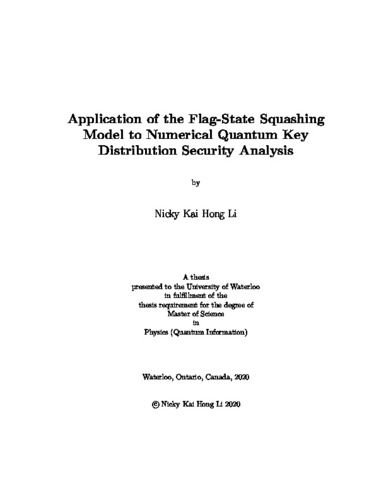 The squashing model proof technique is a powerful tool in proving security of quantum key distribution (QKD) protocols since it reduces the dimension of the associated computational problem from infinite to finite. In the first half of this thesis, we formally prove that the unconditional asymptotic security of an arbitrary QKD protocol after applying a squashing model implies the same security for the original protocol. We also prove rigorously that the squashing map of the flag-state squashing model is indeed a quantum channel for an infinite-dimensional input Hilbert space. In the second half of the thesis, we apply the flag-state squashing model to the phase-encoded BB84 protocol. Since all phase-encoded BB84 implementations have signal states with unbalanced amplitudes in practice, the original security analyses a priori do not apply to them. Previous security proofs use signal tagging of multi-photon pulses to recover the behaviour of regular BB84. This is overly conservative, as for unbalanced signals, the photon-number splitting attack does not leak full information to Eve. In this work, we exploit the flag-state squashing model to preserve some parts of the multi-photon generated private information in our analysis. Using a numerical proof technique, we obtain significantly higher key rates compared with previously published results in the low-loss regime. It turns out that the usual scenario of untrusted dark counts runs into conceptual difficulties in some parameter regime. Thus, we discuss the trusted dark count scenario in this paper as well. We also report a gain in key rates when part of the total loss is known to be induced by a trusted device. We highlight that all these key rate improvements can be achieved without modification of the experimental setup.