Co-Existing: Exploring Commercial Laneways in Downtown Toronto as a Network for Public Spaces 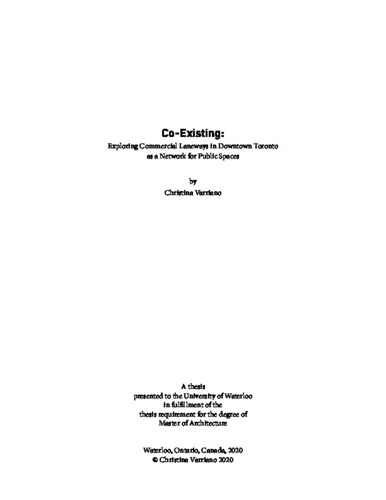 This thesis explores the opportunities that commercial laneways offer for integrating new public spaces into Downtown Toronto, in order to increase the amount of public space in the city core and improve social interaction and community engagement. Public spaces are crucial elements of a city that contribute to the overall civic culture and create a better urban environment for people. Their main role is to support public life by providing a physical space outside of home or work for social interaction. Downtown Toronto is becoming increasingly saturated with high-density developments such as tall condominium and office towers, built to accommodate the influx of new residents, yet the city has neglected to adequately develop the network of public spaces. With a current lack of public space in Downtown Toronto, where can these necessary spaces be found within a city whose population density continues to increase, causing a shortage of available land in the downtown core? There are currently around 750 public laneways in Downtown Toronto, with mixed-use and commercial laneways being the primary typologies in the city centre. Laneways serve important functions in the city; supporting services including garbage collection, loading, deliveries and parking for adjacent buildings. As these services only occur once a day or once a week, the laneways are neglected and unused for the majority of time but could be revitalized to provide more value for the city. In the downtown core, laneways can often be found clustered together, within each adjacent block, offering the opportunity to create a network of public spaces. By improving the spatial organization and efficiency of the existing laneways, they could become shared spaces that support both city services and new public spaces. In a dense urban fabric like that of Downtown Toronto, the integration of public spaces must become a top priority, as they play a vital role in creating a more livable and humane city.