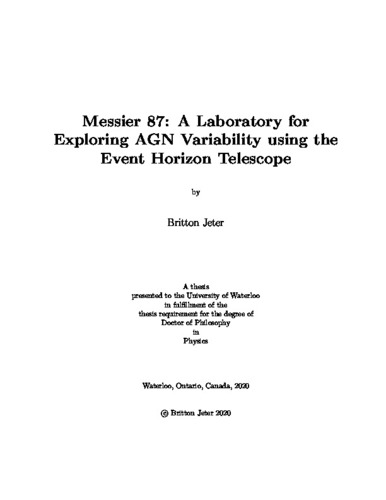 At a distance of 50 million light years at the heart of the Virgo cluster, lies the giant elliptical galaxy Messier 87. This galaxy has at its center a brilliant relativistic jet, observable at all wavelengths, and at the jet's base, the black hole M87*. As of April 2017, this black hole was directly imaged by the Event Horizon Telescope (EHT), a network of eight radio telescopes scattered across the globe. These first images of a black hole will let us investigate not only the physics of black holes, but also the formation and launching mechanism of relativistic jets. The jet in M87 is known to exhibit variability on many different time-scales, from weeks to decades, and comparing the images produced by the EHT to models for jet variability will let us learn how relativistic jets are born. Synchrotron spot models have been used to model variability near black holes; the first part of this thesis extends these models by allowing spots to shear and deform in the jet velocity field. Depending on the position of the spot, shearing forces can significantly alter the structure of the spot, producing distinct signals in reconstructed images and light curves. The maximum intensity of the shearing spot can vary by as much as a factor of five depending on the spot azimuthal launch position, but the intensity decay time depends most significantly on the spot radial launch position. Spots launched by a black hole driven jet exhibit distinct arc structures in reconstructed images, and exhibit brighter and shorter-lived enhancements of the light curve. Spots launched by a wind-driven jet have exhibit much simpler structures in the image, and longer-lived light curve enhancements than spots launched by a black hole driven jet. The EHT measured the mass of M87* to be $6.5 \times 10^{9} ~M_{\odot}$, consistent with previous mass estimates from stellar kinematics, but inconsistent by up to $2\sigma$ with mass estimates made using gas dynamics models of the gas disk at parsec scales. Critical to gas-dynamical modeling is the assumed underlying dynamical state of the gas: that it lies on circular Keplerian orbits, potentially with some additional turbulent pressure support. This is inconsistent with models of the gas flow about low-accretion-rate SMBHs and at odds with observations of the Galactic Center. In the second part of this thesis, I present an extended model for non-Keplerian gas disks and explore their implications for SMBH mass measurements. I show that a larger central black hole with gas experiencing small amounts of sub-Keplerian motion and/or non-trivial disk thicknesses can produce velocity curves similar to models that just contain circular Keplerian motions and a lower black hole mass. These non-Keplerian models are distinguishable from low-mass Keplerian models primarily through measuremnets of the velocity dispersion, wherein non-Keplerian models produce higher and narrower peak dispersions. By combining the existing velocity measurements from \citet{M87gas:13} and the EHT mass estimate, we place constraints on the gas disk inclination and sub-Keplerian fraction. These constraints require the parsec-scale ionized gas disk be misaligned with the \mas radio jet by at least $2^{\circ}$, and more typically $15^{\circ}$. Modifications to the gas dynamics model either by introducing sub-Keplerian velocities or thick disks produces further misalignment with the radio jet. If the jet is driven by the black hole spin, this implies that the angular momentum of the black hole is decoupled with the angular momentum of the large scale gas feeding M87*. The velocity model presented in this thesis is capable of resolving the discrepancy between the ionized gas dynamics and stellar kinematics mass estimates, and is applicable to gas-dynamical mass estimates of SMBHs in general.