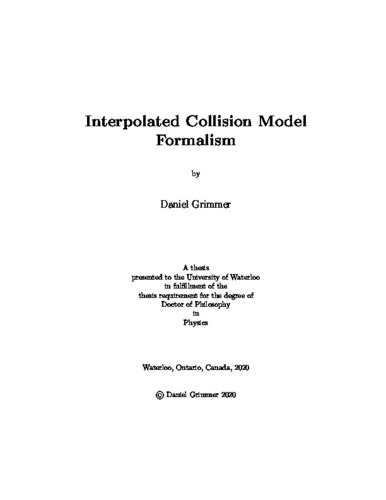 The dynamics of open quantum systems (i.e., of quantum systems interacting with an uncontrolled environment) forms the basis of numerous active areas of research from quantum thermodynamics to quantum computing. One approach to modeling open quantum systems is via a \textit{Collision Model. For instance, one could model the environment as being composed of many small quantum systems (ancillas) which interact with the target system sequentially, in a series of ``collisions''. In this thesis I will discuss a novel method for constructing a continuous-time master equation from the discrete-time dynamics given by any such collision model. This new approach works for any interaction duration, δt, by interpolating the dynamics between the time-points t = n δt. I will contrast this with previous methods which only work in the continuum limit (as δt → 0). Moreover, I will show that any continuum-limit-based approach will always yield unitary dynamics unless it is fine-tuned in some way. Given the central role of information flow between the system and environment plays in open quantum systems, unitary models are wholly insufficient. Thus continuum limit master equations must be fine-tuned to even function as valid models of open quantum systems. For instance, it is common to find non-unitary dynamics in the continuum limit by taking an (I will argue unphysical) divergence in the interaction strengths, g, such that g^2 δt is constant as δt →0. In addition to overcoming the above limitations, the new interpolation-based approach allows for the straightforward treatment of essentially any representation of a quantum system (e.g., Hilbert space vector, density matrix, Bloch vector, probability vector, in addition to a Gaussian state's mean vector and covariance matrix). Examples of each of these representations will be given throughout this thesis. Moreover, the new interpolation-based approach allows for an order-by-order analysis of the dynamics as a series in $\delta t$. This allows us to identify which types of dynamics are ``fast'' and which are ``slow'' as well as how this ``speed'' depends on the interaction Hamiltonian between the system and ancilla. For instance, we can (and will) investigate under what conditions we can see purification effects at first order in δt. As I will show the ``speed'' of the purification effects are tied to the complexity of the interaction; Purification at first order in δt requires the interaction Hamiltonian to be at least Schmidt rank-2. A necessary condition for thermalization is also discussed. In addition to this purification study, I will present a complete analysis of Gaussian dynamics regarding which types of dynamics appear at which orders in δt under which Hamiltonians. Given a Hamiltonian (either designed or fixed by fundamental considerations e.g., the light-matter interaction) we can determine what dynamics are supported at what orders in δt. Conversely, given some dynamics (e.g., from experiments) we can determine what class of interaction Hamiltonians could support it.