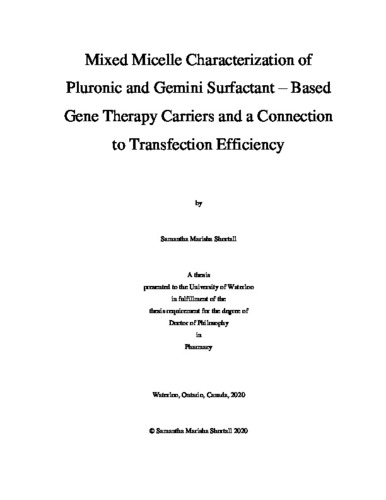 Non-viral gene therapy formulation development often relies on a rational design approach, where vector components are selected based on individual characteristics known to favour transfection efficiency. However, these mixtures do not necessarily result in additive or even synergistic effects on efficiency, leaving the vast majority of non-viral formulations limited by poor transfection. The development of successful non-viral gene therapy carriers is stunted by unpredictable results, even in vitro, and often poor correlations to external physical characterizations such as particle size, shape, and zeta potential to aid in effective screening of potential formulations.1 This creates reliance on trial and error experiments that are not feasible long-term.2 Current gene therapy studies fail to consider the internal mixing interactions involved in self-assembled systems and the effect of the presence of the intended active pharmaceutical ingredient (API), nucleic acids in this case. These factors have an irrefutable impact on transfection; hence, this work aimed to address this knowledge gap by exploring the interactions between the components of a self-assembled Pluronic/gemini surfactant-based nanocarrier for plasmid DNA delivery, and presents a link to transfection efficiency that may inform more effective vector design and screening for future formulation development. In an effort to improve the transfection efficiency of gemini surfactant-based vectors for non-viral gene therapy, the addition of neutral block copolymers known as poloxamers (or commonly by their former commercial name, Pluronics, BASF Corp.) to the N,N’-bis(dimethylhexadecyl)-1,3-propanediammonium dibromide (16-3-16) gemini surfactant have recently been under investigation. Although preliminary studies of such formulations have shown limited transfection in vitro, the transfection efficiencies appear related to the nature and strength of mixed micelle formation in these systems, which may aid the optimization of these Pluronic/16-3-16, and related, systems in the future. To study the plasmid DNA-loaded Pluronic and 16-3-16 gemini surfactant mixed micellization, the full formulations were treated as binary mixtures in water where the 16-3-16/pDNA condensate or complex (prepared at charge ratio N+/P− 10:1) was treated as a single component. A critical aggregate concentration (CAC) of the 16-3-16/pDNA complex in water was determined by surface tension, conductivity, and dynamic light scattering measurements over a range of 16-3-16/pDNA concentrations. Based on these studies, it was also proposed that the gemini surfactant molecules only partially dissociate from the pDNA upon dilution to concentrations below the CAC, leaving a “loose”, electrostatically-bound 16-3-16/pDNA complex. At concentrations beyond the 16-3-16/pDNA CAC, the complex returns to a more condensed form. A series of Pluronic block copolymers (F87, P84, L121, F127, P103, and L44) was used to study the effects of the Pluronic composition on its mixing behaviour with the 16-3-16/pDNA condensates. CAC values determined by tensiometry and application of Rubingh’s mixed micelle theory indicated that Pluronic and 16-3-16/pDNA mixed micellization is generally synergistic in nature but the strength of this synergism decreases with increasing PPO block length. The non-ideal mixing behaviours were attributed to a greater presence of the 16-3-16/pDNA component in the mixed aggregates involving the larger PPO blocks (60 PO units and above), as opposed to Pluronic-rich aggregates for polymers with lower PO content. Presumably, micellization is hindered by the bulkiness of larger PPO blocks. Transfection efficiency was evaluated by expression of enhanced green fluorescence protein (eGFP) as a reporter gene for plasmid expression in COS-7 cells in vitro, and cytotoxicity was determined by propidium iodide staining. Transfection varied with the Pluronic composition and Pluronic mole fraction in the formulation, but there was no significant decrease in the cell viability compared to non-treated cells. The Pluronic/16-3-16/pDNA formulations produced self-assembled nanoparticles with sizes generally below 250 nm and positive zeta potentials that appeared to decrease linearly with increasing Pluronic PEO chain lengths. Although there was no clear relationship between the transfection efficiency and the particle size and zeta potentials, higher transfection was associated with stronger synergism and aggregates enriched with the Pluronic-component. These findings could be used for future optimization.