The Temple Of Afrobeat(s): Re-Imagination of The New Afrika Shrine 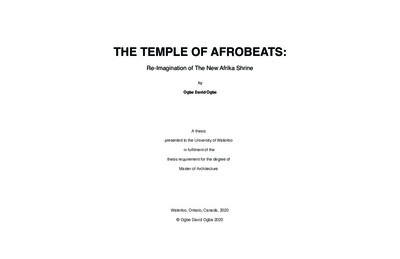 Fela Kuti is very influential to the development of Nigerian music, as he is credited for the founding of Afrobeat, which in turn led to the establishment of Afrobeats, a collection of musical sub-genres of Nigerian and western origins. His involvement in socio-political activism and pan-african socialism, made him a face for the Nigerian music Industry, and put the genre of Afrobeat on an international stage. Over the years, Afrobeats has been recognized as one of the leading musical styles to come out of Africa, with notable acts across the diaspora gaining recognition for the unique sound and performance techniques associated with the genre. However, its history and origins are not as recognized, as the curation and physical representation of this genre has been threatened over the years. The Shrine, which is recognized as being the first ever Afrobeat Nightclub and home of the genre, has undergone a series of relocations and orientational changes spanning from 1970 till today where it currently sits in the heart of Ikeja, Lagos. The new Afrika Shrine, as it is currently known as, serves as a home for the original Afrobeat genre and a centre for the celebration of the life of Fela Kuti. Unfortunately, due to a negative physical representation through design and common societal misconceptions, The Shrine has become a space associated with hooliganism, loitering and crude behaviour, rather than a place for radically inclined conversation and vibrant performances. With reference to the life and vision of Fela Kuti, this thesis is aimed at analyzing and applying the core values that the Afrobeat genre was built on and critically re-imagining the program of the shrine. Subsequently, creating a design scenario for a space that fully exhibits performances, activities and informality that represents the historical and contemporary Nigerian culture. This re-imagination scheme focuses on key elements such as the connection between spirituality and music, enigmatic showcase, education, pan-africanism, community, and Identity, as these influenced the origination and structure of Afrobeat and Afrobeats. In a bid to differentiate between westernization and development in African performance architecture, this design scenario takes influence from traditional methods of performance, which involve a strong connection to nature and an honest incorporation of community and openness.