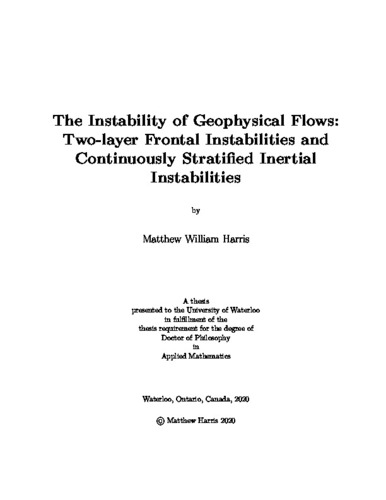 This thesis examines the instabilities of idealized two layer fronts with vertically curved interfaces as well as the inertial instabilities of barotropic and baroclinic jets with background linear stratification. We begin with our investigation of frontal instabilities in the context of a two-layer shallow water model with both linear and vertically curved interfaces. First, we generalize the model previously established to allow for vertically curved interfaces. Second, we revisit the linear interface case but with higher spatial resolution and study the impact of no-normal flow or radiation boundary conditions. The results show that the former prevents a baroclinic mode from occurring. Third, we investigate the novel problem of vertically curved interfaces and deduce that it does not have a significant impact on a baroclinic instability, however, it does alter the regions of Kelvin-Helmholtz and Rossby-Kelvin instabilities. Furthermore it introduces a new type of baroclinic instability that we refer to as the curved-interface baroclinic instability. We then investigate the stability of inertially unstable barotropic and baroclinic jets within the context of a forced Navier-Stokes model under the Boussinesq and f-plane approximations. First, we derive two eigenvalue problems for the linear stability analysis of each jet. The eigenvalue problem for barotropic jets includes viscous terms that were neglected in previous studies and the eigenvalue problem for baroclinic jets is entirely novel. We then develop numerical methods to solve each eigenvalue problem. The stability details of three particular baroclinic and barotropic jets are then examined by using our code for the eigenvalue problems alongside fully nonlinear simulations. Despite having different modal structures in the vertical direction, it is shown that the barotropic and baroclinic jets have similar growth rates in some parameter regimes. Finally to compare the growth rates of the unstable modes for the two jets, we perform five parameter studies for each jet. We find that for sufficiently large Reynolds numbers, the growth rates for both jets are similar but for smaller Reynolds numbers the growth rates for the barotropic jet can be up to twice as large as those for the baroclinic jet.