Structural Investigation of Melatonin and its Metabolites as Possible Calmodulin Antagonists 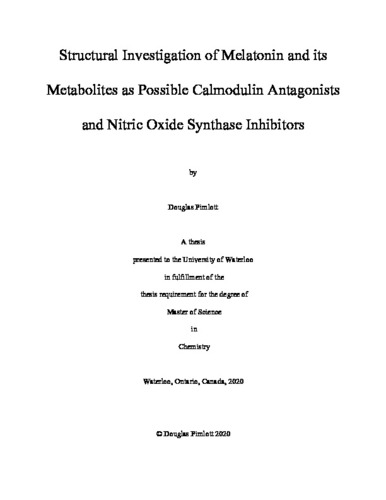 Calmodulin (CaM) is a small, highly conserved and ubiquitous calcium (Ca2+)-sensing protein that coordinates signal transduction through interactions with over 300 target molecules. It is composed of N- and C-terminal globular domains separated by a central flexible linker region. Each domain contains two EF hands that each coordinate one Ca2+. CaM exists primarily as either Ca2+-deplete apo-CaM or Ca2+-saturated holo-CaM. Ca2+ binding causes a conformational change that exposes hydrophobic regions within each domain which facilitates binding to various targets, although apo-CaM is also able to bind to certain molecular targets as well. An important set of targets for CaM are the nitric oxide synthase (NOS) isozymes. NOS catalyzes the conversion of L-arginine to L-citrulline in the production of nitric oxide (•NO). There are three isoforms of mammalian NOS: neuronal NOS (nNOS), endothelial NOS (eNOS) and inducible (iNOS). All three isoforms possess an N-terminal oxygenase domain containing the active site and a C-terminal reductase domain containing binding sites for FAD, FMN and NADPH. CaM binds to a region situated between these two domains, enabling interdomain electron transfer via a highly dynamic process. Ca2+-dependent nNOS and eNOS isoforms are expressed constitutively, whereas Ca2+-independent iNOS is regulated transcriptionally and expressed transiently. NOS isozymes perform various biologically important functions yet represent important therapeutic targets for inhibition in certain cases of overexpression. In one such instance, the overexpression of nNOS and subsequent overproduction of •NO in the central nervous system have been implicated in the pathogenesis of many neurodegenerative conditions including ischemic brain injury and epilepsy. One approach that has yielded success in the selective inhibition of nNOS is the use of CaM antagonists such as trifluoperazine (TFP). TFP is available commercially as an antipsychotic medication and is used to treat symptoms of schizophrenia. The strong nature of its antagonism towards CaM corresponds to high levels of cytotoxicity as TFP has been shown to negatively impact various cellular processes. There is some evidence suggesting that melatonin (aMT) and one of its metabolites, N1-acetyl-5-methoxykynuramine (AMK), act as CaM antagonists and are able to appreciably inhibit nNOS activity. These naturally occurring hormones could prove to be milder and less cytotoxic alternatives to TFP, yet their mechanism of action remains poorly understood. A structural understanding of how these compounds interact with CaM and nNOS are important in further elucidating their value as therapeutic agents. We sought to evaluate the nature of these interactions, with a particular focus on AMK, using numerous biophysical techniques at saturating levels of Ca2+. Far-UV CD, gel mobility assays and ITC experiments demonstrated that the association of aMT and AMK with CaM is very weak, as had been seen in previous studies with aMT alone. CD and SPR competition assays showed a subtle AMK-mediated selective reduction in complex formation between CaM and the CaM-binding domain peptide of nNOS. NMR solution structures of CaM bound to AMK revealed that the ligand does not cause significant conformational changes in the protein, with the globular domains retaining their orientational independence from one another. The strengths of residue-specific interactions with AMK were determined to be in the low millimolar range using 15N-HSQC NMR titrations, with N- and C-terminal domains possessing comparable affinities. Likely binding surfaces were determined to be located primarily in the hydrophobic cavities within each domain. This was corroborated by molecular dynamics studies, in which the most stable binding modes occurred when AMK was localized hydrophobic patches in the N-terminal domain. We propose that the inhibitory effects of AMK are likely the result of a modulation of cellular function via gentle antagonism of CaM. The low affinity of CaM-AMK complexation would suggest allosteric alteration of the CaM-nNOS complex rather than direct competition for the binding pockets of CaM.