Risk and Benefit of Warfarin for Primary Prevention in Atrial Fibrillation Patients on Hemodialysis: A Retrospective Pilot Study 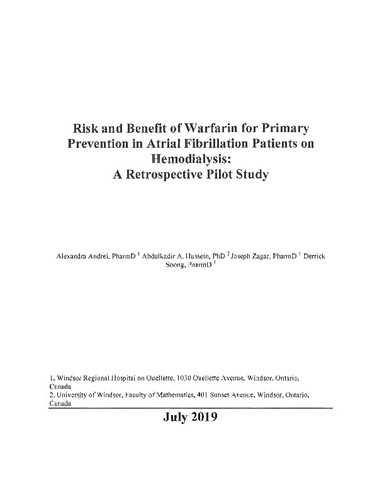 Rationale: Although warfarin is an established anticoagulation therapy for prevention of ischemic strokes in patients with atrial fibrillation, studies reporting INR values with correlation to warfarin efficacy and safety outcomes in patients on hemodialysis with atrial fibrillation are scarce. The purpose of this study was provide additional information to aid in optimizing future clinical anticoagulation decisions for patients with atrial fibrillation on hemodialysis. Methods: A retrospective cohort study was conducted from April 2011 to January 2019 at a regional kidney dialysis centre in southwestern Ontario, Canada. The primary objective of this study was to correlate achieved INR measurements with the efficacy and safety of warfarin anticoagulation. Results: A total of 286 patients were reviewed and 25 patients were included. No ischemic strokes were reported and six bleeding episodes occurred. The mean INR of the 25 patients was 2.4 (SD±0.47) with an average follow up of 336 days. Using a Cox Proportional Hazards Model, univariate correlations between risk of bleeding and baseline characteristics were examined and no statistically significant correlations were found. Conclusion: Patients on hemodialysis with atrial fibrillation may have a higher bleeding rate while on warfarin despite having therapeutic IN Rs. This may be attributed to the small sample size, duration of observation and factors such as intra-dialysis heparin use and uremic platelet dysfunction. Therefore, initiating warfarin for primary prevention in this patient population requires a careful assessment of bleeding risk factors. Further studies are warranted.