Global land use and the future of sustainable consumption: projections of a coupled social-land use model 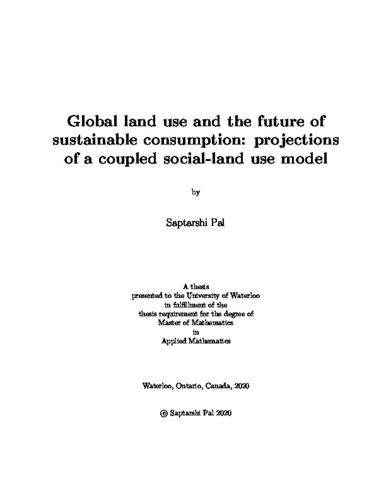 Throughout history, agricultural land use activities have shaped the environment and its inhabitants. Humans have sought to maintain their well-being for centuries by finding revolutionary ways to produce and gather food. But challenges that are new to us--both in nature and intensity--face the human race and its planet as we move further into the 21st century. Global food demand is currently at its peak and is projected to grow in the near future due to growing global population and global affluence. Subsequently, pressure on the agricultural system is expected to increase to meet the elevated demand. Agricultural expansion, a possible pathway for meeting increasing demand, has been shown to bring with it severe impacts on climate, environment, and ecosystems. While several land use mitigation strategies have been thoroughly explored in the literature, they have mostly been centered around policy regarding land use management and investment in agricultural technology. In most of the models, future dietary patterns of populations are assumed to behave independently from land use change. The immense potential of sustainable consumption in land use mitigation, stimulated by desires to avoid agricultural expansion into sensitive ecosystems, has only been explored through scenario constructions. Little effort has been spent on understanding how sustainable consumption might begin evolving in a population as a behaviour in response to land use dynamics. This thesis introduces a minimal mathematical model based on evolutionary game theory that couples human behavioural dynamics with land-use system dynamics. This coupled human-environment model helps in gaining a better understanding of the evolution of sustainable diets within populations while making global land use projections till 2100 under multiple future socio-economic scenarios. Results in this thesis highlight the direct impact of social processes on global agricultural land use and underline the barriers and drivers of human consumption behaviour. The model framework lays the foundation for further developments in complex coupled human-land system models that focus on gaining deeper insights into system dynamics and possible future outcomes of interventions.

Saptarshi Pal (2020). Global land use and the future of sustainable consumption: projections of a coupled social-land use model. UWSpace. http://hdl.handle.net/10012/16278