Participatory Budgeting in the City of Kitchener: Influencing Perceptions of Park Access, Park Use and Citizen Engagement 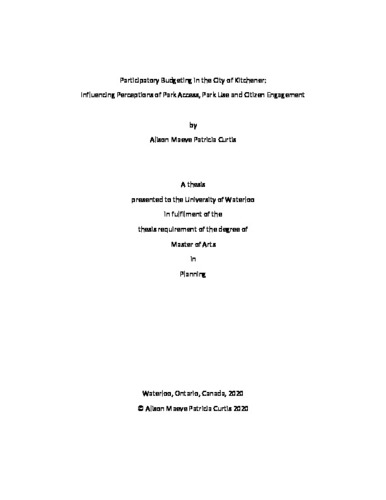 There is consensus among urban researchers that access to public parks and participation in the planning process are important aspects of urban life. Public parks provide mental and physical health benefits to individuals, while also helping to promote sense of community and social cohesion. Involvement in the planning process can help to empower residents and allow them to positively shape their environment, while also creating effective and efficient planning outcomes. Despite these benefits, some city dwellers, particularly low-income and ethnic minority groups, perceive these spaces and opportunities as inaccessible. This can result in poorer health outcomes for these groups, as well as non-inclusive and non-representative participation in the planning process. The purpose of this study was to examine the Participatory Budgeting (PB) process, which more directly involves the public in the planning process, as a potential tool to address these issues. A mixed methods approach was used to assess the City of Kitchener’s PB Pilot Project, combining quantitative surveys and qualitative key informant interviews to gather data. The results showed that PB could help to improve perceptions of access and increase the use of parks, as well as positively influence citizen engagement. Key informants identified that PB gave residents autonomy, influence, and ownership in the decision-making process, which resulted in park space that reflects their needs and over which they have ownership. For these reasons, key informants thought that PB could positively influence perceptions of access and park use. A third of the survey participants indicated that their barriers to park use would be reduced, suggesting their perceptions of access improved, and 57 per cent of participants indicated that their park use would increase. The increased outreach efforts by the City were noted as key to increasing and expanding participation, which was confirmed by the survey results, as 54 per cent of respondents were involved sometimes or never prior to the Pilot Project. Key informants identified the potential for PB to empower and increase future civic engagement, as residents were able to see the direct impacts of their involvement, as well as build relationships, social capital, and democratic capacity. The survey results also indicated that PB could increase civic engagement, as 46 per cent of participants said that their participation would increase. This study recommends PB as a tool for planners to develop positive perceptions of park access, increase park use, and positively influence the citizen engagement process.