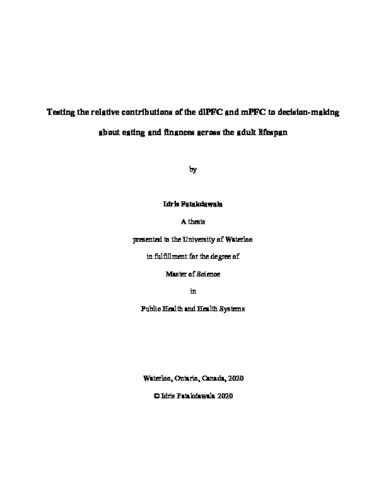 Background: Prior neuroimaging and neuromodulation studies have shown that the dorsolateral prefrontal cortex (dlPFC) and dorsomedial prefrontal cortex (dmPFC) are important nodes for self-control and decision-making, but through separable processes. However, very little is known about the relative contribution of both these regions in two important domains of decision making for older adults: 1) financial judgement and 2) consumption of appetitive high-caloric snacks foods. Objective and Hypothesis: The objective of the study was to examine the effects of excitatory brain stimulation (iTBS) on financial decision making and eating, as mediated through cognitive performance. Given that the PFC and its subregions are differentially sensitive to the effects of aging, it was hypothesized that age (older versus younger) might moderate the effects of stimulation. It was further hypothesized that excitatory stimulation would lead to a decrease in consumption of appetitive snack foods and improvement in financial decision making (i.e., reduced discounting of delayed rewards; delay discounting). Methods: Using a single-blinded, between-subjects experimental design, a sample of 22 younger adults and 21 older adults (N = 43) were randomly assigned to receive iTBS in one of the three conditions: 1) active iTBS to the left dlPFC; involved in the modulation of pre-potent responses; 2) active iTBS to bilateral dmPFC; which is involved in subjective valuation processing, or 3) sham iTBS; the control/placebo condition. After the stimulation session, participants completed two cognitive tasks (delay discounting and flanker), and a bogus taste test. Functional-near infrared spectroscopy (fNIRS) was used to validate iTBS effects on cognitive task performance via changes in blood oxygen saturation levels. Results: Results indicated null effects of iTBS on food consumption, flanker performance and delay discounting, with no moderation by age category. However, a significant moderating effect of gender emerged, such that a significant increase in calorie dense food consumption was evident among those in the dmPFC stimulation condition. This effect was mainly driven by the consumption of sweet foods. Finally, fNIRS data suggested a strong left lateralized activation on the incongruent versus congruent flanker task, with overall lower oxygen demand in the active stimulation than the sham stimulation. In contrast, medial channels were activated for the delay discounting task, with a significant increase in oxygen demand for the dmPFC condition compared to the sham condition.

Idris Fatakdawala (2020). Testing the relative contributions of the dlPFC and mPFC to decision-making about eating and finances across the adult lifespan. UWSpace. http://hdl.handle.net/10012/16260