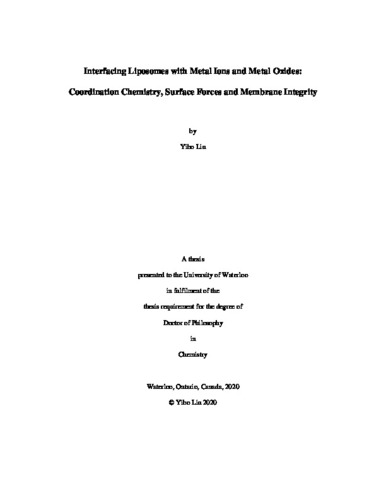 Liposomes are self-closed vesicles composed of lipid bilayer walls that have been widely used as models for cell membranes and drug delivery vehicles. One interesting research direction is to study the interactions of membranes with various ions, molecules and materials. Among them, metal ions and metal oxides are attractive because of their biological/technological significance and their unique coordination interactions with lipid headgroups. Previous studies reported in the literature focused mainly on electrostatic interactions, while more specific chemical interactions were overlooked. The primary focus of this thesis was to study the liposome interactions with metal ions and metal oxide nanoparticles (NPs) to provide insights into contributions of lipid headgroup chemistry. In my study, the main types of surface forces were probed, the effects of these interactions on liposome stability and membrane integrity were investigated, and general interaction models were proposed for each system. In Chapter 1, the relevant background knowledge on lipids and liposomes is introduced. The research progress in the literature of the interactions between lipid membranes and various metal ions/metal-containing NPs is reviewed. Most previous work focused on group 1A and 2A metal ions, such as Na+ and Ca2+, while the work on transition metal ions and lanthanide ions was much less frequent. In addition, SiO2 or glass surfaces were most widely used for interfacing with liposomes, while transition metal oxides were less explored. With this context, the motivation and goals of my research are described at the end of this chapter along with the outline of the thesis, and my research focused on transition metals, lanthanides and metal oxides. In Chapter 2, the binding of Zn2+ to headgroup-inversed choline phosphate (CP) liposomes was systematically studied and compared to standard phosphocholine (PC) liposomes. The CP lipid has an exposed terminal phosphate, which has a stronger metal binding affinity compared to the bridging phosphate in a PC lipid. Zn2+ caused significant aggregation, stacking, fusion, and transient leakage of the CP liposomes, while it had little effect on the PC liposomes. Isothermal titration calorimetry (ITC) showed that the binding between Zn2+ and CP liposomes was endothermic and, in contrast, no heat was detected by titrating Zn2+ to the PC liposomes. Negative stain transmission electron microscopy (TEM) revealed multilamellar CP lipid structures attributable to Zn2+ sandwiched between lipid bilayers. A reaction mechanism was proposed and the stronger adsorption of Zn2+ with CP liposomes was attributed to the stronger metal binding affinity of the terminal phosphate. In Chapter 3, I studied the binding between Cu2+ and four types of liposomes: PC, phosphoglycerol (PG), phosphoserine (PS), and CP. Using a fluorescence quenching assay, I demonstrated that Cu2+ strongly bound to the CP and PS liposomes, while the binding with the PC and PG liposomes was much weaker. The membrane integrity of the PC liposomes was not affected by Cu2+, whereas liposome fusion and leakage occurred for the other three liposomes. Under TEM, Cu2+ stained all four types of liposomes with a short incubation time (< 1 min). In addition, the oxidative catalytic property of Cu2+ was inhibited by the tight binding of the PS liposomes. Finally, a model interaction for each liposome was proposed, with each liposome having a different metal binding mechanism. In combination with Chapter 2, I demonstrated that different metal ions interact with each lipid differently. In Chapter 4, liposome-directed growth of gadolinium/adenosine monophosphate (Gd3+/AMP) coordination polymer shells was demonstrated. First, the binding of a lanthanide ion (Gd3+) to the CP and PS liposomes was studied. Gd3+ binding did not cause significant liposome fusion, and no leakage for the PS liposomes was observed. Taking advantage of this observation, adenosine monophosphate (AMP) was added to crosslink Gd3+ on the liposome surfaces forming a Gd3+/AMP coordination polymer shell with the contents remaining inside the liposomes. The shell protected the liposomes against leakage induced by ZnO NPs but not against a surfactant molecule Triton X-100, suggesting a porous structure of the Gd3+/AMP shell. This work not only provides a simple method to coat liposomes, but also offers a fundamental understanding of liposome adsorption of lanthanide ions. In Chapter 5, the adsorption of nanoceria (CeO2 NPs, ~5 nm in size) onto PC liposomes was studied. CeO2 NPs possess different surface charges at pH 4 and pH 7.6. The CeO2 NPs were adsorbed by the PC liposomes at both pH’s, but different adsorption isotherms were observed. At pH 7.6, the CeO2 NPs were nearly charge neutral and induced aggregation of the PC liposomes at all CeO2 concentrations. At pH 4, CeO2 NPs were positively charged, and a restabilization in the presence of a relatively high amount of the CeO2 NPs was observed. The phosphate group in the PC lipid was mainly responsible for the adsorption, and the adsorbed CeO2 NPs could be displaced by free inorganic phosphate ions. The CeO2 NP-induced liposome leakage was attributable to a transient lipid phase transition, and the overall integrity of the liposome was retained. This study provides a fundamental understanding of the interaction between lipid bilayers and CeO2 NPs at a molecular level, which may offer insights into the interaction of CeO2 with cell membranes. In Chapter 6, to investigate a perception in the literature that cationic nanomaterials are more membrane disruptive, the leakage and rupture of lipid membranes by a few charged NPs were systematically studied. In this work, instead of solely using different materials for testing the effect of charge, we used the same materials and obtained different surface charges by adjusting the solution pH. A total of three types of liposomes, PC liposomes with saturated and unsaturated tails and PS liposomes, were tested with three types of metal oxide NPs, namely ZnO, TiO2 and Fe3O4. The adsorption and membrane leakage were carefully studied by varying NP surface charges, surface-capping ligands and solution ionic strength. Overall, this study suggests that charge alone is not the determining factor for membrane damage, but rather a strong interaction strength is key for membrane leakage. Finally, the conclusions of the thesis are summarized, and future research opportunities are given in Chapter 7.